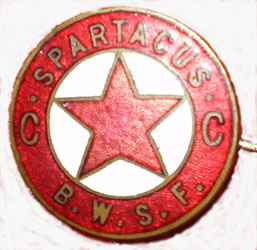 All out for the red start

Marie Schmidt was 20 then
Every day she worked all day
She produced commodities
Yet she remained in poverty.
As she learns from watching films
Marie lives – she waits and waits
For the miracle to come.
Success comes with her start!

Walter Vogel was a small
Employee in a company,
Almost famished he lives by
His fantasy of being grand.
If promotion doesn’t come
Sport is used as substitute.

[This is the second song by Siegfried Moos that I’ve posted, after Red Sportsmen don’t believe / that sport alone can liberate. Moos was a songwriter, poet, and left-wing-activist. There were three characters in Moos’ ‘Alles am der Roten Start’: Vogel, a lowly white collar worker who is often hungry, and strives to be important, and ends up turning to sport; Marie Schmidt, a young factory worker, and Anton Schmidt, who is unemployed. The musical in which it appeared was first performed to an audience of 4000 people in Berlin in summer 1932, and ended with calls to vote for the Communist candidate in the pending presidential elections. Travelling to Britain after the Nazis seizure of power, Moos became an academic and then eventually an adviser to Harold Wilson’s first government. Those wishing to know more about him should read his daughter Merilyn Moos’ semi-autobiographical novel, The Language of Silence]