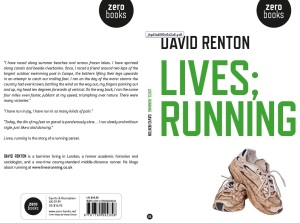 A couple of friends who read this blog have written to me in the past week to ask about the book to which this blog is linked. As you can see from the “book” button, above, Lives; Running will be out at the end of July, and is published by the left-wing/cultural publisher Zero books.

The book covers similar, but different, material from this blog. The book was written in spring and summer 2011, when I was starting to run again after a five year gap, and it explores my ideas about running, and various role models I have had, both positive and negative.

Unlike this blog, Lives; Running is not a book about the Olympics or the follies of their organisers. That said, a considerable part of it is given over to the athletics career of a runner who epitomises my ideas of how not to run, namely Seb Coe. Any readers interested in that part of the book are encouraged to read my posts here about Coe’s rivalry with Ovett.

I’ll post more about Coe – as a runner, and as a politician – as we get closer to the Games.

Two influences on my writing were Alan Sillitoe and Haruki Murakami.

One of the ways in which Lives; Running differs from them, and from most running memoirs (many of which are written by ultra runners), is that the “memoir” is chiefly about my teens when I was a middle- and not a long-distance runner. I dislike running more than 6 miles: my legs hurt, I never reach that “transcendence” that many long-distance runners describe. If I could have 6 months of good training, without injury, I’d most like to run a much shorter distance – possibly 800 metres or 1500 metres –  at speed.

Much of the book is about ageing, about suffering injuries, and about how a body can carry the legacy of (over- or maybe just wrong-) running.

The book is written in a very “rigid” form, which I’d rather not seek to explain until people have the book in hand: save only to say that this is deliberate.

Finally, much of the book is about generations, and about how personality and values can be passed on from one person to another. I write about my father and my sons. There’s a deliberately “feminist” or perhaps “socialist-feminist” message which again I’m looking forward to discuss with readers when the book is out.