They were handing out Olympic-themed packets of Krave cereal at Mile End tube station (a product so well-enriched with sugar that it is known as “Crack4Children”). The first steward to arrive had settled with other anti-corporate veterans in a branded coffee house beneath the Green bridge, and was waiting for our briefing to begin. “You’ve never seen so many police vans in your life,” she told me. But the vans, it turned out, were all driving the other way.

In the weeks building up to the demonstration, I’ve met more different police officers than I have in the previous two decades put together: from the PC in charge of the traffic cones (“we will be laying the cones at two meter intervals. They will be made from orange plastic…”) to the working-class mum (who on finishing her escort of our five-mile anti-Olympic torch relay insisted on posing with us for photographs, “we’ve even got Critical Mass on the New Scotland Yard wall…”). I’ve met more senior officers who’ve been promoted rapidly for their role in the policing of dissenters (i.e. us) and I’ve encountered – more than once – the mute tension that culminated in Friday’s police riot.

In their absence, the demonstration was happy; relaxed, self-aware, conscious of the gap between what we want to do and the numbers we have on our side, but relieved, and capable of more.

The route followed from Mile End Park to Wennington Green. There was a lengthy pause outside the missile site at Bow Quarter. 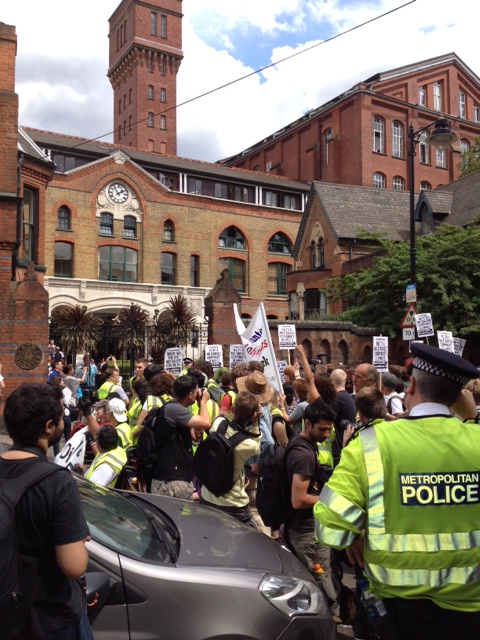 And the crowd intervened successfully to prevent the one attempted arrest: a demonstrator equipped with nail-scissors who was foolish enough to try to clip a piece of the white ribbon which the police were using to mark off our route.

The main target of the chants was Our Tory Olympian:

“Seb Coe, Get Out, we know what you’re all about! Missiles, job losses, Olympics for the bosses!”

“Hey Ho, Sebastian Coe Get your missiles out of Bow”

In Wennington Green, the speeches began with Brian Richardson, East End resident and my fellow Haldaner, who was followed by Ruth Turner of War on Want, and Chris Nineham of Stop the Olympic Missiles.

The march has made the BBC and even the Daily Mail.

“It wasn’t the largest demo I’ve ever been on, but it was lively, vocal and angry”, Gareth Edwards of Inside Left writes, “And it felt important.” I’m not sure about the anger, but I agree with him about the march’s importance.

A friend who travelled widely in post-Stalinist Russia, hoping to encourage its citizens to rebel, once confided to me his greatest surprise on exploring its cities. Expecting to be constantly surrounded by images extolling the people to believe in the virtues of the Soviet system; he found in fact a near absence of visual propaganda. Not having a plethora consumer goods to advertise, rather only one product (the state), there were of course posters glorifying the regime – but they were occasional. Traveling through Moscow or Leningrad you could walk for an hour or more without seeing anything endorsing the regime.

The organisers of the London Olympics have drawn from this story the lesson that saturation advertising is the surest way to maintain support; whether it is the posters in the railway stations insisting that the Olympics could not take place without corporate backing and listing the corporate sponsors (but not naming the main funder, whose backing outweighs that of all the other funders together by ten to on; the tax-paying working-class), or the MacDonalds ads colonising the transport links to the Olympics, or the interminable television and radio coverage forcing even loyal listeners away from the BBC.

This was the victory of yesterday’s anti-Olympic demonstration: for the 5-600 people present it broke through the isolation imposed on the Olympic disbelievers and reminded each of us that we are not alone.

UPDATE: there’s a lovely short film here which gives a sense of the scale of the demo, as well as the views of the participants.