More people want to watch sport, but when this desire interacts with inequality of wealth and access, the result is that fewer and fewer people are allowed in. No event illustrates this more neatly than the recent London Olympics. As the London Metro reported yesterday:a vast operation was at work to make sure that the most desirable tickets were kept out of the hands of ordinary spectators and reserved instead for corporate sponsors.

Only 3% of tickets for World number 1 Novak Djokovic’s opening match in the tennis went on general sale, with the vast majority going to sponsors. Less than half of the tickets for the cycling went on general sale; most of those that were sold were kept in the “top” price bands of £150-£325. LOCOG promised to keep half of all tickets in every event affordable (ie under £20).  This target was missed for every single sport with the sole exception of the unloved Olympic football.

The problem is hardly restricted to London 2012. The increasing rigours of work in an age of austerity mean that the vast majority of people are too time-poor to do anything with sport but watch it. Indeed, we watch sport from further and further away. Here, as so often, football shows the way to all other sports. Check old photographs of the crowd at the Hillsborough FA cup semi-final between Liverpool and Nottingham Forest in 1989 and you will see something as distant to our time as Arkwright’s spinning machine which launched the Industrial Revolution; a football crowd composed of people in their early 20s or younger (37 of the 96 dead were teenagers).

In the modern Premiership of £2000 per year season tickets, few workers under 30 can afford to get in. The average spectator watching Premiership football live is now in their mid-40s. Younger supporters make do, not with watching games live in the flesh but watching them on television, not with scanning free-to-view programmes but with satellite channels, not on ordinary subscriptions but on pay-to-view tariffs. Supporters are driven to scouring the internet for clips of goals, even though they are mere fragments of games.

No sport is exempt from this dynamic of holding the spectator at further and further remove from the action. Live Test cricket is banished to satellite television, so are the Cricket World Cups. Watch the footage of West Indies’ victory at the 1975 World Cup Final at Lords and you will see an audience, young, mixed in terms of both race and gender, responding jubilantly to every boundary. You will not see the young or the poor at the 2013 Ashes not when ticket prices start at £80 per day.

For football in particular this banishing of the spectator is extraordinarily self-defeating. Take away the intense passion of its supporters and football would be just another sport, as well-paid and as culturally significant as handball or darts.

Force people physically away from live sport, and their ability to grasp it is diminished. Their perspective is narrowed and flattened. In the women’s 800 metres finals at the Olympics, the consensus of those who commentated on the event was that Caster Semenya could and would have won gold if only she had started her final sprint 50 metres earlier. It was the judgment of people who followed the event on a screen, focussing (as the camera does) on the action at the head of a race, not on those – like Semenya – struggling at the halfway point to keep up with the early leaders. Watching live sport gives invariably a broader canvas, a better chance than technology ever allows to peer back from the moment, to view the whole, to see the runs at the side of the action, to grasp tactics and the personality of all the players.

Late capitalism refuses to allow both a broad perspective and the intimate view that you can only get in the flesh.

“Anyone knows; if you’re on for a PB, you’ll run a bit harder.” The words are Ben’s, chatting before our last Parkrun. They reflect a runners’ common sense, and they are the sort of thing you hear often at club races or on Marathon Talk.

Beneath them, is an assumption about what the typical runner’s “career” will look like. Take a friend of mine, Jane, who is a typical club runner in her early to mid-40s. She began running about 7 years ago, when her best time was about 26 minutes for 5k. Over seven years, she has reduced it to within a few seconds of 22 minutes. Her improvement has been pretty steady: 40 seconds in year 1 of running, a full minute in year two, with no noticeable trailing off for age. Every year, more or less, she has achieved a personal best for the distance and there is no particular reason for anyone to assume that she is going to reach her best ever time – yet.

But take another runner, Charles: he is older than Jane (mid-50s), has been running for longer, and runs further (she runs a couple of marathons a year; he runs 40 miles a week plus, every week, without fail). Over the past seven years he has reduced his 5k time to a best of just over 21 minutes. But as well as a “PB” in one of his last four races, his other three 5k times were a lot slower – between 23 and 24 minutes. Just as his best times have improved a little, his average speed has dipped – because of the time he has been running, and with age.

I know that computer gamers sometimes talk of an “arc of discovery”, by which I understand them to mean that when you start playing the game, there will be lots of skills you acquire. With a relatively small investment of time you will feel that your interest in the game is being rewarded. But a clever programmer will build into the game further accomplishments, so that someone who plays for a long time will continue to have a good reason to maintain their interest. If the initial arc is too shallow, no-one will get in to the game. If it is too steep, no-one will stick with it.

Running can have its own ark of discovery, but if this about beating your own best time, it should be pretty obvious that someone like Jane, even though she has been running a while, is likely to keep on hitting “pbs” in future (if, perhaps, not quite as often as before) while for someone like Charles, simply because of the amount of time they’ve been running and their age, there will probably be fewer pbs in future.

Moreover, I suspect that Jane is unusual in that she has had seven years of pretty consistent improvement, and maintains further room to improve. Compare Jim who seven years after taking up the sport is a sub 2:45 Marathon runner, and whose age graded times I’ve listed below:

(NB: the Y axis shows races, listed by month and year. Each dot is a race. They are a range of events, from 5k to a Marathon. I only have access to this information as age-graded, not absolute times. The effect of age-grading is equivalent to about 0.5% p/a. I.E. if a runner’s annual pb for a distance remains static over a 5 year period age-grading would lead to an “automatic” improvement of 2.5% or just a little more than one of the bands 76-78%, 78-80%. I. E. of Jim’s improvement, only around a third is down to age grading, the rest is sheer improvement in Jim’s actual times).

What I see here is about 4 years of dramatic improvement followed by around a year of consolidation. And I suspect this arc is pretty  commonplace: that people who take up running seriously (at any stage) “should” improve naturally for about three to four years. Whether they carry on improving beyond that stage will depend largely on their age – if they’re still under 25, they should have some age-related improvement ahead of them – if not, then they will probably “plateau”.

This in turn begs the question of why someone like Charles keeps on running. I don’t know how long he has been running, but my best guess is that it has been for more than 20 years. My sense is that for many lifelong runners their motivation is maintained by a much wider set of factors than pure time. It might be that they enjoy running with friends. It might be that they want their club to win certain kinds of races. It might be that they experiment with running a wider variety of distances (including simply, longer distances: much as I could never participate in the ultra running boom, I know it has to come from somewhere).

I don’t think that even someone in their mid-50s who has been running for 40 years or more ever quite loses the search for “the perfect race” (to which the personal best is of course an approximation), but I think that their notion of perfection alters. It might be that self-transcendence is about a passage of five minutes or an hour in which just everything “clicks” – rhythm, pace, environment.

A runner is in much the same position as a studio musician. We spend our lives traveling from race to race compelling our friends and running companions to endure endless “jams” or mediocre albums in the hope of a unique moment of musical / athletic transition.

Still held back by my weakened calf, I keep to a “comfort” distance (3 miles per run) and try to strengthen my leg by building up the frequency of my running. I run in a sweater and running trousers, with a hat and scarf but no gloves. I trust the principle that as I run my body will warm up naturally.

After a week or two of stiffness, but without pain, I allow myself the luxury of a parkrun. By a pleasing coincidence, a friend Ben, 18 years my junior, is there also. His recent times over 800m or 5k are little different from mine.  He sets off hard, and at one mile is at least 200 metres ahead. By the start of the second lap, he is so far ahead that I can barely squint at him in the distance.

I up my tempo, desperate to catch up with him. He stops momentarily at the start of the final hill. Running as hard as my body will allow I close on him until, with a bend to go, I can almost touch him. “Ben!”, I shout. Hearing me, he hares off again. I end the race eleven seconds behind. 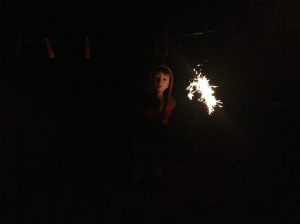 Running along London streets early one autumn morning; I find park gates locked, bus stops occupied by middle aged women, standing with their heads placed forwards against the plastic, actually asleep. My route is the descent of a hill falling down towards the Regent Canal. The road beside me is almost empty, save for the slow meandering sound of the night buses delivering cleaners to central London offices. My feet almost slip on the skeletons of rotting leaves. I abbreviate my stride, shifting my weight forwards onto my toes. Even nature is still asleep.

Passing a weekday nightclub, the few departing dancers (silver dress, faces stained with fluorescent paint) are outnumbered five or six to one by minicab drivers, stood in a circle joking and clapping their hands to conserve the heat.

And then the sudden joy: I am running along the canal, there are no more lights. In the day this is a cycle route; now it is still. The morning is unequivocally dark. Through the tunnels, beneath the bridges, as I pass, I cannot see the moisture of my breath forming in clouds before me. I do not even have the chance to inspect the ground beneath my feet as they strike against the concrete path. I have to dare myself to go on. A younger me would have rebelled at this point and stopped and returned home to bed, I do not. I tell myself there will be no bottles or discarded glass. And there are none.