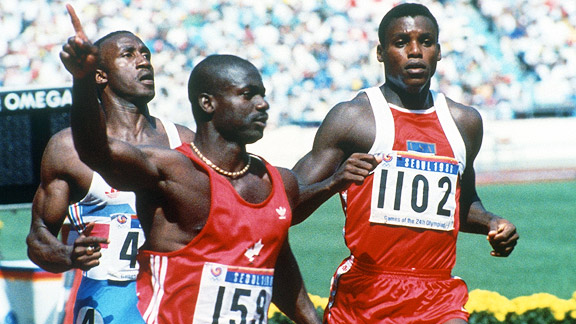 Today is the 25th anniversary of Ben Johnson’s run of 9.79 at the Seoul Olympics; a race in many ways more glorious and shocking than Usain Bolt’s 100m in Beijing or his 9.58 run a year later in Berlin. If Bolt had both races won within 50 meters, Johnson had destroyed the field within 10 meters. Caught up in the exhilaration of the race I took a look at the splits for Johnson and Bolt’s respective records

There are a number of things to note from these splits:

– Johnson would have had a lead of 0.07 seconds translating to approximately 0.7m after just 10metres. It was the greatest start in the history of the 100m.

– However Johnson’s lead was down to 0.02 seconds at the 20m mark, approximately 0.2m. That is Bolt pulled back half a meter on Johnson in just 10 meters.

– From 10m mark onwards Bolt took 3 meters off of Johnson.

– Johnson’s pick up was what won him the race in Seoul. From 30-60m he was almost stride for stride with Bolt. He left his rivals, Carl Lewis among them, completely behind in those 30m.

Of course the statistics don’t tell the whole story; or at least not in Johnson’s case. The story of Bolt’s race really did last less than ten seconds. Johnson’s run in Seoul had a prologue and postscript which prolonged its narrative for many years. The story arguably began back in the 1984 Olympics when the rivalry with Lewis started (Johnson was run into third place by Lewis), and continued to build over the next four years culminating in their last ever race together. The story then obviously continued when Johnson failed a drugs test a couple of days later. Arguably the story continues today as the shadow cast over the sport has not gone away. If anyone ever runs faster than 9.58 Bolt’s legend will be tarnished. Johnson’s notoriety is timeless.

If I was ever to write a book about sport it would be to draw upon the elective affinity between Mike Tyson, Diego Maradona, and Ben Johnson. All three were short explosive men that would literally tear through much larger taller men. Watching Johnson run, Tyson fight, and Maradona play football is unlike anything else their respective sport has ever seen. Before or since. It isn’t beautiful, its obscene.

Their sporting peaks were as shocking as much as beautiful, as outrageous as they were dominant. Maradona’s finest hour was the 1986 World Cup in Mexico. In the quarter final against England the first goal was brazen, the second majestic. England were left cheated and humiliated. Tyson’s destruction of Michael Spinks a couple of months before Johnson’s run in Seoul lasted for about as much time. Within twenty seconds the referee, Frank Capuccino, was already warning Tyson for throwing elbows. A minute later Spinks was down for the first time in his career. Seconds later he was down for the second time and lying through the ropes. If Johnson in hindsight had the race won in 10m, that wasn’t the expectation. Everyone knew Johnson had a great start, but Lewis was the fastest finisher in the world. For Johnson to have extended his lead over Lewis from 30-70m was impertinent.

Their performances were as much defined by the manner of their opponents defeat. The two moments that stand out in the England/Argentina quarter final were the wretched look on the England manager Bobby Robson’s face when the referee awarded the first goal, and Peter Reid’s somnambulation for Maradona’s second goal. If many experts had picked Spinks to win before the fight, they weren’t by the time the fighters touched gloves. Spinks had the look of a man condemned giving the iconic end picture a sense of inevitability. Lewis was so flustered by Johnson’s start that he twice ran out of his lane. If the defining moment of Johnson’s career was his raising his hand in victory with 10meters to go, what made it so emphatic was the anguish on Lewis’s face as he looked across to witness Johnson’s celebration.

All three performances were within a two year period of each other. It was the latter half of the 1980s when the commercialisation of sport was really taking off. All three represented huge commercial prospects, but none of them were equipped to handle what this entailed. These were basically young troubled kids from very poor backgrounds. Tyson grew up in the notorious district of Brownsville in Brooklyn New York where from a young age he had got into trouble with gangs. Johnson was a Jamaican immigrant living in Canada who had turned to sprinting as a defence against being bullied. Maradona was from a shanty town in Lanus, with an indigenous heritage. All three had their problems with drugs. Johnson infamously so. Maradona was also on steroids from an early age and then was a cocaine addict for most of his career. He was sent home from the ’94 World Cup in similar circumstances to Johnson. Tyson was a drug addict for his whole career (although there isn’t any evidence he used performance enhancing drugs).

All three saw themselves as outsiders to the sports that wanted to make them their public face. And of course they were outsiders. Despite being money making machines the authorities quickly became highly ambivalent about them; an ambivalence that climaxed with their peak performances. They had provided the defining moments of their respective sports for a generation, but the authorities were not prepared to accept them. Tyson had originally been marketed as the troubled kid come good. By the time he fought Spinks and with a host of tabloid scandals behind him he was ‘the baddest man on the planet’. Maradona had only recently left Barcelona having fallen out with the president. This was his last game for the club. The scandal surrounding Johnson began at the 1987 World Championships. Upset at the manner of his defeat, Lewis, the biggest name in the sport, initially claimed that Johnson had false-started, then complained of a stomach virus, before finally making this famous allegation—‘There are a lot of people coming out of nowhere. I don’t think they are doing it without drugs.’ It later transpired that Lewis himself had failed a drugs test the following Olympic year. The golden boy of athletics kept his gold medal.

Johnson, Tyson and Maradona were far more comfortable playing the roles of rebels. Tyson and Maradona embraced this status in a much more overt political way than Johnson ever did. Both sport Che Guevara tattoos and have spoken out harshly against racism and imperialism respectively. Johnson kept to the micropolitics of his sport – claiming, with some justification, that he was a scapegoat for a problem that is endemic.

The Seoul Olympics spelled the end for Johnson as a competitive sprinter. He made a forlorn attempt to make a comeback in 1992 only to stumble in the heats. Maradona enjoyed a few more successful years with Napoli before being effectively chased out of Italy and then Spain. Tyson defended his title a couple of times, before succumbing to the greatest upset in boxing history when he was knocked out by a 40-1 underdog. In the same year that Johnson retired and Maradona left Napoli, Tyson was convicted of the rape of Desiree Washington, an 18 year old beauty contestant from Rhode Island. She was just 18 years old. Her treatment, both by Tyson and subsequently by the media (who having spent years character assassinating Tyson were suddenly hellbent on closing ranks behind him) casts light on some of the contradictions within the concept of “defiance” presented here and serves as a reminder that the roles of victim and victimizer aren’t invariable. By the time he came out of prison he was a shadow of his former self.

Of course Maradona, Johnson and Tyson defeated themselves. No one made them take drugs or commit rape. However the drug addictions they were afflicted by and the violence at least Tyson inflicted were symptoms of a larger system of exploitation they were born into. When they became athletes they encountered this same system only more intimately. Their sports chewed them up and spat them out. What is more, all three of them understood this. This meant that even at their peak, when they had the appearance of being unstoppable, their display of power and domination had an element of defiance and rebellion to it. For one summer’s day in Seoul, Mexico City and New Jersey the tables had been turned—‘three small men tearing through much larger opponents’ is both graphic depiction and political metaphor. It is this that makes them and their performances so compelling.