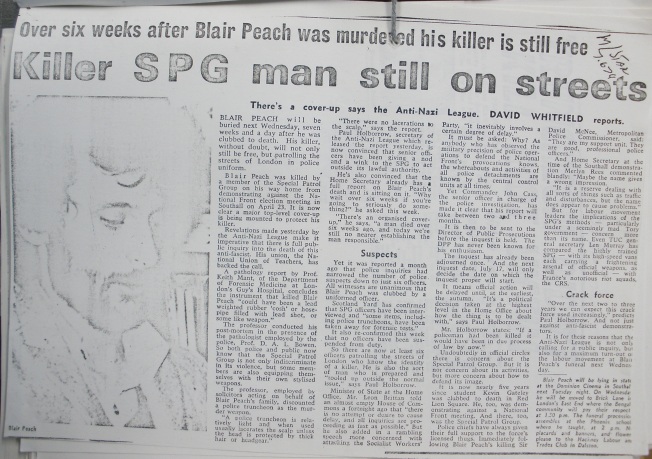 Over the next few weeks, and in the run up to the 35th anniversary of Blair Peach’s killing (on 23 April), I will be republishing around a number of articles which were published in the British national press between June 1979 and April 1980, to give you a sense of how the story of Peach’s killing developed – and in particular how the Metropolitan Police came under immense pressure to, but never did, publish the “Cass report” (i.e. its own report into Peach’s killing).

I’ll intersperse them with other published accounts – including descriptions of Peach by his friends, photographs of him, and previously unpublished documents which will I hope give a greater sense of his personality.

Today’s article is from the Morning Star, on 7 June 1979. By this stage, Peach had been dead for six weeks but remained unburied. Alongside details of his lying-in-state, and funeral, you will also see that one key piece of information was already in the public domain: that the Met’s inquiries had reduced the number of officers under investigation to just six …