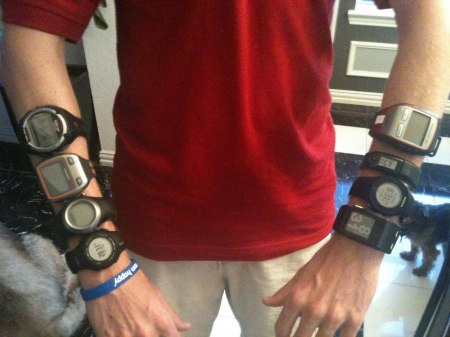 Five months without a fight among friends have left me running more often than at any time since my eldest son was born. Six months ago, I believed that I was incapable of running more often than three times a week, and it just seemed obvious to me that if I tried to run more often I would inevitably suffer an injury, probably to my achilles tendon. When I ran three days a week I would get injured roughly ever 2-3 weeks or so. Counter-intuitively, five months of running six days a week has resulted in almost no running injuries at all. It is as if I have strengthened the muscles all around, protecting my lower legs where I remain vulnerable.

My running has been more varied than at any time in two decades. Highlights have included morning runs before London awakes and night runs while it sleeps (the night so dark that I could not see the ground beneath my feet); a gentle six miles through the hills and valleys of the Isle of Man with long stretches of the route ascending at an incline of 1:8; coastal paths of gorse descending to unmarked beaches; spring rhododendrons; the view of the city from Hampstead Heath. More of my running has been competitive, with had track sessions on Thursdays (work allowing), a parkrun about every two weeks, an 800 metre race, a track 5k, and a flat 5k around the Serpentine lido – all in just 4 months.

At this point, I know, several of my friends part company with me. Why do you need to run competitively they ask? Isn’t it enough just to enjoy the scenery and to allow your body to relax? If you consider yourself a socialist, then isn’t it a small act of treachery to your political beliefs to seek out races where you are running against people?

A possible defence would be to deny that the running is properly competitive at all, to insist that running clubs are co-operative as much as they are competitive and to insist that I am doing this only to build up my miles. But, in truth, I enjoy running fast. I am built physically for it: my stride is heavy, my best age-related times are for differences just about 400 metres (i.e. where much of the running, as it is for a sprinter, is anaerobic). To consider myself fast, I had to have some sort of comparative yardstick; there is something truly hollow about haring around a disused piece of inner city grassland for lap after lap chasing yourself with no-one to watch and no way to gauge your speed.

Indeed, I do think there is a point at which the competitiveness of sport can tip over and serve as a kind of ideological waymark towards the intensified market competition that we associate with neo-liberalism. Sebastian Coe‘s intense Toryism first shaped the way he ran and was then reinforced by competitive success, hisaccumulated cultural capital was used by New Labour to justify the Olympic bid, and he has used his sporting prowess to build links to and earning favours for Hague, Johnson and Cameron. Coe was always a lesser human being than Ovett, Cram or Elliott, whose attitude towards competition was always more nuanced, and who left the sport early in contrast to Coe, who hung on and on and took everything he could.

There is a chapter in Chumbawamba guitarist Boff Whalley’s brilliant book Running Wild which notes that even in the fell races of the mid-80s, which Whalley half-seriously suggests as a vision of an alternative libertarian future, the scoring rewarded teams which ran individually and did not encourage the faster runners to (for example) drop back and help the slowest runners.

And yet there are different ways to run, even within the same framework. Runners do often hold themselves back for their running comrades;  Ovett was as brilliantly indifferent to the tabloids as Coe was in thrall to them. At any humdrum athletics meeting,  you will find people who are there to give and those who are there to take, people who encourage and take pride in others’ performances and those who are trying to boost themselves.  All the races properly started, all the team brought to their starting destination, most of the infrastructure of any athletics team is maintained by people who are not competing (or not selfishly). Who timed Coe’s great races? Obviously not Coe, Cram or Elliott, or even Ovett.

What I best enjoy about running competitively is the sense of racing myself: there is something definitive about a runner’s time. You know at the end whether you getting faster or slowing. The numbers are as implacable as the figures for BMI or blood pressure, and, just like them, they tell you how far or not you are succeeding in defying the gravity of age.