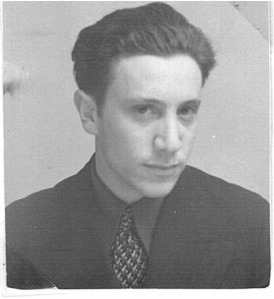 A review of Merilyn Moos, Beaten but not Defeated (Chronos Books, £17.99)

Siegi Moos (1904-1988) lived through extraordinary events, A teenage observer of the Bavarian Soviet, then at the end of the 1920s a Berlin Communist, he was a prominent figure in some of the least well-known organisations of the KPD milieu (the Red Front Alliance for Struggle or RFB, the Berlin Proletarian Freethinkers, the Red Sport movement,and agit-prop theatre). On exile to Britain from 1934, he was temporarily one of the leaders of the KPD exile organisation in London, before for 30 years after 1938 voluntarily exiling himself from the political left.

His daughter, Merilyn Moos, has written a generous and candid biography of Siegi, which does not hesitate to address episodes about which her parents never spoke. One of the most significant is her mother Lotte’s decision in 1934, a year after having married Siegi, to fall for a second activist Brian Goold Verschoyles, and then in 1936 to leave for the USSR to be with him. Brian was some kind of Soviet spy, while Lotte was critical of leaders of the Soviet Union, and Brian’s punishment for the treachery of a relationship with a “Trotskyist” was to be sent to the war in Spain (a sanction which may have appealed to him, opening up at least the possibility of escape over the Pyrennees). When she continued to correspond with Brian in Spain about the fate of the POUM, Brian was captured by his Soviet handlers and killed. Although Lotte and Siegi were reconciled, right up until her own death seventy years later, Lotte kept mementoes of Brian close to her.

For many readers, the most striking parts of the book will be those in which Merilyn Moos locates Siegi within the German revolution, which most of us know through only the books published by Broué and Harman. Siegi was in the Berlin leadership of the Freethinkers, a group campaigning for divorce and abortion rights, which had shifted towards the KPD after a long period as one of the SPD’s many workers’ clubs. By around 1930 he was the editor and chief theorist of a Berlin magazine, Arbeiterbühne und Film, which was the publication of an organisation of several hundred agit-prop theatre groups, including 30 in Berlin alone. He wrote lyrics for the Red Sport movement, several of which were set to music by the composer Stefan Wolpe, including a musical All out for the Red Start, performed to about 4,000 people in Berlin in February 1932.

Siegi is at times a slightly distant presence. Moos argues that because of his background in Bavarian circles he took anti-fascism more seriously than others of his comrades, and did not share the language of the Third Period or the KPD’s attacks on the SPD as “Social Fascists”. Beyond this, she struggle to get beyond the silence of her parents (neither of whom talked about their youth, and both of whom were dead before this book was finished) to the ups and downs that Siegi must have experienced within a Communist Party that a week before its dissolution in 1933 was the third largest party in Parliament with 17% of the vote. In particular, I would have liked to have seen more about the RFB – the KPD-allied but in large part-independent movement of anti-fascists within which Siegi and the freethinkers and agit group groups moved.

Siege’s journey is much better documented during exile. The domestic catastrophe of Lotte’s affair with Brian was interwoven with a series of political defeats, including emigration, having to learn a new language, marginalisation within the KPD London group, and a period of internment as a suspected enemy alien. These setbacks provide the book’s title, while Siege’s redemption is established in the series of steps he took from the late 1960s onwards to re-establish a practical relationship with the ideas of his youth: buying Labour Worker, reading pamphlets produced by the Solidarity group, writing about the betrayal of the German revolution of 1919, supporting his daughter against an attempted witch-hunt within her own union NATFHE, joining the Hackney Writers’ Workshop run by Ken Worpole, and publishing poems of the struggle.

The book ends with an account of Siege’s death in Homerton Hospital, wiggling his toes to the beat as his daughter sang him the Internationale, and with Lotte at Siege’s memorial service reading – aptly – from William Morris’ Dream of John Ball:

“I pondered all these things, and how men fight and lose the battle, and the thing that they fought for comes about in spite of their defeat, and when it comes turns out not to be what they meant, and other men have to fight for what they meant under another name…”