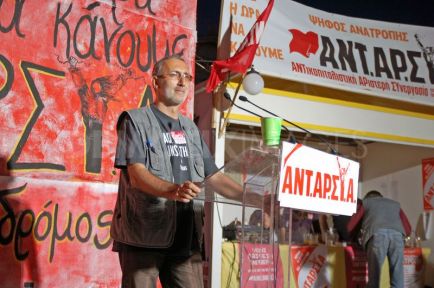 For those of us who were until recently more sympathetic to Antarsya, the “other” left-wing coalition on Greece’s radical left, it is salutary to reflect on how well Syriza has done in the last month, and how poorly Antarsya has done by comparison.

The justification for Antarsya’s separate existence goes something like the following: Antarsya, unlike Syriza, is a coalition of the parties that believe that Greece can only be saved by a revolutionary transformation of the state. Syriza, unlike Antarsya, equivocates on this issue, and on the connected questions of whether the Greek government should remain in Europe or whether it should agree to pay any of the debt to its international creditors. Those who vote for Antarsya are voting for a revolutionary alternative to capitalism and, in so doing, they keep alive the possibility of a revolutionary politics. Syriza by contrast is merely reformist; and likely to every bit as shabby in government as PASOK, Labour etc.

Inevitably in the last election, Antarsya’s vote was squeezed to just 0.6% since the election became a referendum on the possibility of a left-wing government (which most politicised workers want), but by standing Antarsya has kept pressure on Syriza from the left. Its stance outside Syriza has all the benefits of being associated with a rising movement (the sales of Workers’ Solidarity the newspaper of one of Antarsya’s affiliates, have apparently never been so high), but none of the disadvantages of being associated with Syriza’s defeat, when that disappointment inevitably comes.

Who makes the revolutionaries?

Where this justification of Antarsya begins to fall down is with the assumption that the best alternative to a programme of reform is to offer a rival, programme of greater reforms. In this revolutionaries are different from reformists principally in that they ask for more. So Syriza offered Greek nationality to the children of all migrants; and, like a poker player, Antarsya “raised” them, by offering to legalise all immigrants in Greece. Syriza said that it would stop all the planned privatisations; Antarsya’s reply was to say that it would undo every privatisation in Greek history.

Using elections to make revolutionaries is not about out-bidding your rival, it involves an explanation of both any government under capitalism has only limited power, and how those limits can be overcome (only through a direct conflict with the international capitalist class). It is at this point that Syriza comes over as politically more sophisticated than Antarsya, because it had an analysis of its own limits as a reforming government (the European powers will not allow us to write off more than a small portion of our debt), and an idea of how to get beyond that limit (on the basis of agitation from outside parliament keeping pressure on the government, and on the basis of support from the left outside Greece).

In so far as they have a political strategy to deal with the problem of Syriza, Antarysa’s most articulate supporters are hoarding every example of Syriza’s betrayals, and counterposing to them the potential virtues of protest. The openings for a left-wing government in Greece are said to operate solely in relationship to the success of social movements. The reason why the Greeks have Syriza, it follows, while we are lumbered with TUSC, is that we only had the public sector pension battle while they have had 32 general strikes. But where is the mass movement supposed to come from, which will rise in such a direct and continuous fashion that it will be powerful enough to overcome the state? Syriza’s fault is said to be that it, like other reformist governments is continually conspiring to demobilise the mass movements by telling the workers to vote when they should be protesting.

Yet all of us who are watching Greece can see for ourselves that – admittedly only in its first two weeks, and so far during a honeymoon period – Syriza has not been demobilising the movements, rather it has opened new possibilities for them to emerge: by taking down the barriers outside Parliament, with the demonstrations in support of its attempts to renegotiate the debt, and by the propaganda of sending its ministers around Europe and demanding that the debt be renegotiated. It comes over as the equivalent in the parliamentary sphere of the trade union official you always wanted to have, the one who actually enjoyed a fight with the bosses, and did not back down at the first sign of trouble. People respond to a fighter: so far, the Syriza government is giving further confidence to the social movements.

Subject to the iron law that the global capitalist class has not simply renounced its hegemony in the face of a localised threat, neither will it, and therefore the big battles all lie ahead – Antarsya’s global supporters were wrong, and Syriza’s international admirers were right to challenge them, when the former predicted that Syriza would respond to power only by becoming increasingly moderate.

The final assumption that underpins Antarsya’s supporters is that the working class is Greece has an infinite set of opportunities and that if it should miss this one, that would not matter, since at another stage in the future another party would doubtless emerge on the left, which would be based on different people from different traditions, and would therefore be well placed to carry on the previously-missing revolutionary war against the state.

Should Syriza fail, it will not be simply politics as usual. The police and Golden Dawn will be jubilant, and their revenge on the movements will be no more tolerant than the counter-revolution now at work in Egypt.