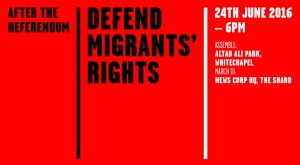 The old swung it. There’s no mystery about why Exit triumphed; it had its core vote among the over 65s, among the generation who could remember Biggles and Baked Beans and when diversity on TV was the Black and White Minstrel Show. Of those young people who voted, three-quarters voted to remain but a greater proportion of the old actually voted and it is their greater turnout which explains why exit won.

You could, if you wanted to, blame the young for not voting in even large numbers. But who with their heart beating could vote happily for the Europe of Schauble and Merkel, the Europe that imposed water charges on Ireland, the Europe that forced bankruptcy on Greece?

The main organisations of the British left have hardly covered themselves with glory in recent weeks. A year ago they said that UKIP was an existential threat to socialists and demanded that everyone unite with them against its threat. This week, they were not Standing up to Ukip but Voting with Farage. All the rest of us still defer far too much to them.

The new left says “Defend” – starting with the rights of the EU migrants which are now in jeopardy. This is a humane and necessary  response. I will be part of it, starting with the first protest for migrants’ rights this very evening.

But the referendum shows us that the will to protect what we have is insufficient.

The reason the right won is that they were not defending. They were not maintaining a position from the past. They were demanding something new. We live in a moment when social resources are rationed, and everyone who depends on them can see for themselves that in future there will be less free education, less free health care, less social housing. In circumstances where people are told repeatedly that our defeat cannot be reversed, it is not absurd to conclude that if only foreigners are excluded from the welfare state then there will be more for “the likes of us.”

It felt as if remain was saying “we have enough rights now”. This was a weaker and more defensive argument. How could the poor be better off than they were already? Even those of us who argued for left remain positions could not say that “voting with us will make things better”, only that it would not make life worse.

The British population has grown in sixty years by 20%. Let us concede the possibility that to host 20% more people you need 20% more houses, 20% more jobs, 20% more cars. In the same period, GDP has grown, not by 20 or 25% but by 2500%. There are more than enough resources to go around. Limiting benefits by nationality is not a strategy to maintain the welfare state but to surrender it.

This is the argument the left needs to win, and we can only do it in the same way as previous generations: by making demands and winning them and showing that it is possible without racism to win more for those without.  A hundred years ago, people argued for pensions, for benefits for the unemployed. With each reform that was won, people’s ambitions for the future were raised. The task in our own time is to show, as Corbyn briefly argued a year ago, that the homes of the landlords are not theirs for life but can be returned to the people who rent. To restore the corporations and the rich to the tax system, which they have been allowed to escape. For a universal basic income, available to all irrespective of nationality.

Only if the left learns to defend less, and demand more, will we avoid more wretched mornings like this one. 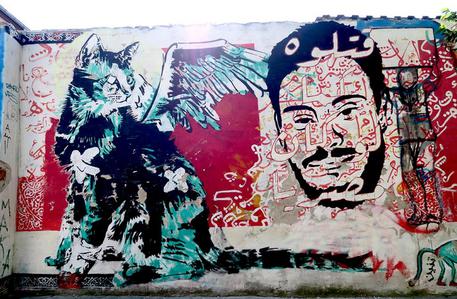 There are any numbers of photographs of Giulio Regeni with cats. His cat has been tortured (the bandages), in common with so many victims of the regime and it has the wings of a martyr of the revolution. The cat’s eye has been painted clear in memory of the protesters whose eyes have been shot out. On Giulio’s face are the words of his mother at his memorial, that he was killed like an Egyptian.

Solidarity and love to all those fighting for justice for Giulio. 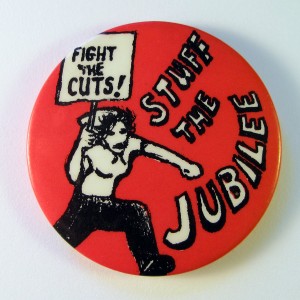 My friend and comrade Sherrl Yanowitz has died this evening. She became a socialist at Berkeley in the mid-1960s, joining SNCC and Core and hearing Hal Draper speak. She was part of a generation that sat down on train tracks to stop military trains and marched on the Bay Area docks to stop ships loaded with weapons for the war. She came to London in 1969 and was a part of the women’s and anti-racist movements, I remember finding an archive photograph of her and her partner Neil Rogall, both with giant hair, on a protest against the NF’s racist landlord Robert Relf in 1975. She joined the International Socialists, later the SWP and was amongst many other things a member of that party’s unofficial AgitProp committee, whose launch statement declared, “This first national AgitProp meeting wants an end to drab socials, colourless meetings, boring education, unconvincing propaganda and bad jokes…”

In 1977, Sherrl had the idea for a Stuff the Jubilee badge: the printer laughed at her when she took him the design, but so popular did it prove that in the end 40,000 of them were stamped, and the slogan took a life of its own, inspiring other leaflets and events. She was a woman in the male-dominated printing industry, and on strike at Wapping, and toured the country speaking on behalf of the strikers.

In 1991, when I was in central London and under-employed on a gap year, Sherrl made me an honorary member of the SOAS SWSS group, and persuaded me to give my first political talk (the title, “What’s wrong with British Justice?” turned out to be a larger part of my life than I could have guessed). She was comfortable in a diverse left which included anarchists and orthodox Trotskyists (Paul Mason was standing behind another SOAS table), academics, both Marxist and otherwise. She shared the memories of her working life: speaking with Paul Foot about Wapping, sharing an elevator once with the hulking, sweating evil that was Robert Maxwell.

She found her own path in the 1990s and patiently for her friends to join her, telling me on my first departure in 2003, “Welcome to the biggest political party on the left in Britain, ex-members of the SWP”. She left and she never stopped being an activist. In 2003 she was taking photographs against the war and helping build the movement. She did not hide her view that the leaders of Stop the War were failing the movement but few things gave her (as an anti-zionist Jew) more pleasure than watching the sudden dialogue that emerged between the socialist left and British Muslims. Where people were in the wrong she could be as hard on them as nails, but when people (sometimes the same people who were otherwise at fault) got something right, she did not stint in her praise of them.

Sherrl was the most generous friend that anyone could ask for. She lived by another dissident US Marxist Elizabeth Gurley Flynn’s idea, that you can tell the worth of a leftist by the love they show to children. She came to see us and photographed my eldest son when he was just three days old. The picture still is on our walls at home and in Sam’s grandparents’ home.

When the crisis happened in the SWP in 2013, Sherrl knew immediately what side she was on and behind the scenes gave the most support she could to the people who fought. When a new organisation, RS21, was launched, it felt to her that here was a chance – at last – of creating the principled left that for years she had missed. I can’t promise that we are, or ever will be, quite what she wanted. But thanks in part to Sherrl we’re still trying. My love to her and my love to her partner Neil.

One day we’ll win and when we do, I’ll be thinking of Sherrl.