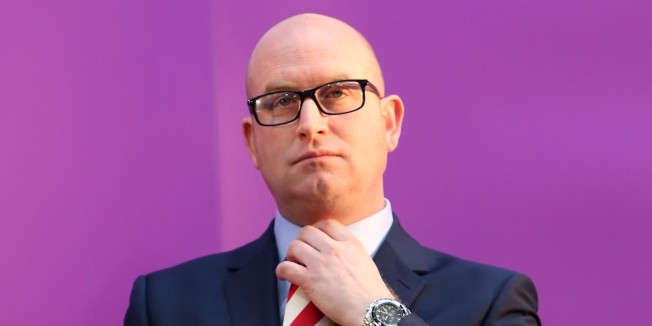 Later today, Paul Nuttall is going to replace Nigel Farage as leader of the UK Independence Party. This will be a strange experience for me. You will see in the coverage of his past career that Nuttall was once, briefly, a history lecturer. Before that he was a student, and in 1999-2000, I taught Paul Nuttall for a year. A year was long enough to get a good sense of a man who is going to be part of our lives rather more in future.
Nuttall was then studying at Edge Hill College on a History BA. I taught in the history department, where I was responsible for various courses including a one-year course teaching the history of fascism in Italy and Germany, for which he signed up. Nuttall struck me as bright and cynical. He was 23 years old – as old as the graduate students we taught, not our undergraduates, almost all of whom were straight out of A-levels. He seemed to have a stronger personality than any of his peers. While most of the students knew only what it said in the various course books, he had read more widely, in books and on the internet. He didn’t express his views openly but from time to time you felt he was testing the water to see what he could get away with.
In early December 1999, Nuttall’s cohort were set a standard essay on the causes of the Holocaust. I forget the exact title, but the question was something like whether the Final Solution was principally caused by Hitler’s anti-Semitism or by other factors related to the German economy or state. To my surprise, Nuttall’s answer worked in two footnotes to different books by David Irving. I wasn’t expecting this, because Irving wasn’t on the course reading list: this was after his libel trial and historians regarded Irving as an unpleasant, racist crank who was beyond the pale.
Moreover the references did not engage with the subject that Nuttall had actually been set: it felt rather as if he had written them in to see whether he could shoe-horn these views into an academic context and “get away” with them.
One of the quotes (for an essay about the Holocaust…) was from a book David Irving had written about the Hungarian Uprising of 1956. The message of the other Irving quote was that that anti-Semitism had been popular in Weimar Germany: the quote exaggerated the extent of anti-semtiism and carried the implication that it had been popular because it was deserved.
The incident was one of the oddest and most unwanted experiences I’d had as a teacher. I had taught fascism courses in different institutions over the previous three years including to A-levels students at Tower Hamlets college. Those students were under enormous and sometime contradictory pressures from their family, the mosque and the big trends in global politics that were heading in the direction of 9/11. But nothing they had ever written compared to this. I had never seen a student argue anything that could even remotely be characterised as “the Jews deserved it”. While Nuttall’s piece as a whole did not go that far, that seemed to be the message of the quotation he had used
I met Nuttall to discuss what he had written and he gave a tearful denial, saying that his girlfriend had downloaded the references to Irving’s book from the internet, blaming her rather than his own judgment. He accepted that the words could be construed as having an unpleasant, even racist meaning. But he denied that this had been his intention. He seemed shocked to be challenged about anything – like smug, arrogant, people everywhere he was most comfortable in a small bubble where no-one could disagree with him.
Standard

My uncle Peter, who died on Thursday, was many things: an entertainer, a proud trade unionist, an author. As Pierre the Clown he was a fixture on children’s TV in the 1960s and 1970s. As the owner of the original Chitty Chitty Bang Bang car from the film, he performed in the 1980s and 1990s at hundreds perhaps thousands of Christmas events, weddings and local shows. He would drive Chitty through crowds in their thousands, waving back as the children in his audience waved at him. He became an honourary, working-class, Royal.
Pete never talked about his childhood. As he told it, his life’s story began in his teens when he went to stage school. In his holidays, he worked as a chef’s assistant. In time, he began a new career as the apprentice to Coco, the head clown at Bertram Mills circus. “Coco had a marvellous act, pies and custard, pasting up rolls of paper, rolling them up, rolling them down, so that the paste went everywhere. The humour,” he used to say. “It was all timing, you know.”
By 1954 Pete had adopted his stage name of Pierre the Clown. In 1956-7, weeks after the Soviet tanks had put down the workers’ uprising in Hungary, Pete was one of the first western acts to be allowed into Budapest. He worked there with another friend, an Italian clown called Cavalini, “Huge numbers came,” he said. “They love their circus in Eastern Europe, it was their main source of entertainment. For me, they were wonderful days, but the atmosphere was strained, you knew something was wrong.”
He had a favourite prop, a black Model T-Ford. Pierre would try to open one door but it wouldn’t and another swung open in its place. Then the doors would open, but they fell off. Miming between each setback incredulity, defeat, renewed hope, Peter attempted to drive the car from its back seat. The car would start before finally spilling him onto the floor.
The chef Robert Carrier worked with Pete, and sent him touring around schools talking about dental health. A special poster was commissioned, in typically sixties lurid blues, reds and yellows, “Pierre the Clown says End you meal with an apple. It’s nature’s toothbrush.” Pete was the clown handing John Lennon an apple at the opening of the Beatle’s Apple Boutique.
In 1967-8 Pete was now at the height of his celebrity. In 1967, by which time he was the father of a young son Jon, he released a pair of singles, Pierre the Clown in Nursery Rhyme Town and Pierre the Clown in Space Rhyme Town. They start with familiar rhymes, but the rhymes take detours. They become something new and wonderful and strange. He wrote The Gourmet’s Guide to Fish and Chips; and a children’s guide to Hastings.
He worked for the Rolling Stone on their circus tour. He was also at his most active within Equity, negotiating the clowns’ pay rates with the major circuses.
In 1968, Pete worked as a driver on the film ‘Chitty Chitty Bang Bang’. At the end of the film the props were auctioned off and Pete was able to buy the working car complete with its Gen 11 numberplate. The car was to become the mainstay of Pete’s working life, and for the next forty years he performed at countless shows acting Pete’s own creation, a mixture of Dick van Dyke dashing inventor Caractacus Potts and Lionel Jeffries’ eccentric Granda Potts.
In the early 70s, Pete met Susie and they were to live together more 42 years, in Belgravia, then in Shipston and for thirty years in Stratford. They married in 1988.
In 2013, Susie and Pete sold Chitty. It was an inevitable and a right decision. Pete  suffered intense arthritis in his hands and knees and found the work hard. But he fought retirement for many years. Even without Chitty, he was still a local celebrity: he couldn’t go to the bank or a shop without meeting or making a friend.
Pete was one of those rare adults who believe in children, who are aware of the powerlessness that the young can feel. A stream of youngsters came to Susie and Pete’s house, were given presents of sweets, make-your-own models of Chitty or Smurf stickers. “Here’s something,” Pete would say and they would leave with a five or ten pound note.
Pete was one of those big, bold people whose lives evade categories. Someone who hated racism and homophobia and who paid his union subs years into retirement. But the newspaper he read, even in hospital, was the Daily Mail.
I visited him two days before he died, his face covered in an oxygen mask. He could communicate only in sign language and whispers. But he wanted to know how I’d travelled there, how my children were. His face creased in a broad smile when he heard that they were acting and dancing. All of sudden he waved, he pointed. I was wearing trainers, bright red running shoes beneath my grey trousers, my grey top. He pointed to them and he laughed. “I like them,” my uncle the clown said. Even in hospital, Pete was still thinking of other people rather than himself. Fighting for his life, he cheered us up by making a joke.