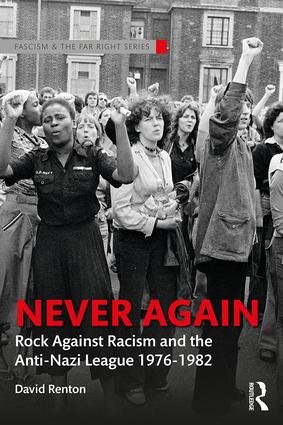 Tim Wells has written up one of the book’s launch events in the Morning Star: “RAR,” he writes, “changed the face of a drab, politically festering Britain.”

In the New Statesman, John Harris describes the book as “forensic” and “eloquent” and concludes:

There are obvious lines to be drawn between the Powellite cry of “Send ‘em back” and the Home Office’s current hostile environment doctrine, as shown in the ongoing Windrush scandal. And when Renton describes the League of Empire Loyalists as “a movement of the old rather than the young, and of men with social power”, he shifts the reader’s attention to the present with even more clarity. That description surely fits the politics of Brexit, and the alliance of angry fifty-somethings who now howl their rage on Question Time and Boris Johnson, Jacob Rees-Mogg and Nigel Farage – whose delusions and prejudices deserve a cultural response that has so far failed to materialise.

I do not know what a 21st-century version of the Victoria Park carnival would look like, whether any musicians will ever again channel their time as brilliantly as the Clash, or if contemporary popular music could give rise to anything resembling Rock Against Racism. But this book once again put an inescapable thought in my mind: isn’t it time someone at least tried?

The book itself is still available to order – most efficiently and without avoiding union-busters – here. I’ll be doing launch events in the next few weeks in Leicester,  Brixton, Bristol, Melbourne, Dunedin, Wellington, Chicago … – so drop me a line you’d like more details or want to suggest somewhere else that suits you.