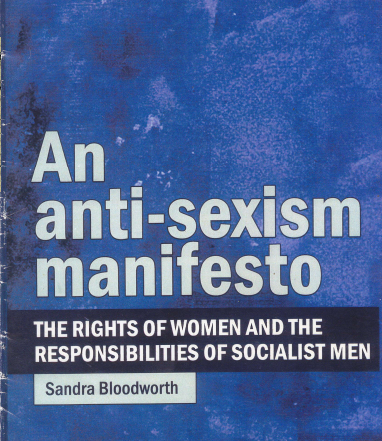 [The following piece was published today by Exchange magazine]

The main motion for discussion at the SWP conference in December will say, “Conference recognises … That all the comrades involved in the DC hearings sought to apply our politics in a principled way at all times and tried honestly to do the best they could in the circumstances. All DC hearings have been conducted with integrity”. That last word, integrity, is the important one.

I don’t want to make familiar points going back over what happened at that DC hearing; or whether it is possible to transform an investigation from scandalous to principled merely through a conference vote. Here, I want to ask: what does the left need to do, if we are ever going to have again a reputation for integrity?

The word “integrity” means at least two different things. In a first sense, it just means being principled and living by what you believe.

For a very long time, in so far as the SWP has thought about “principles”, we have assumed that they could be subordinated to the interests of the party, which stood in our understanding as a proxy for the class, which stood for all of humanity. “Anarchists”, we have explained, may see a revolutionary group as the harbringer of a new society, but “Marxists” don’t agree with them: it is not possible to wash off what Marx once called “the muck of ages” (i.e. oppression and its effects on both oppressor and oppressor) merely by wanting to be better, without a social revolution. But in the last year we have found that we are being judged, not for the formal content of our ideas but the mismatch between our ideas and what we have done.

A socialist party cannot pretend to be the growing embryo of a potential future society. But behaving repeatedly in an unprincipled manner is enough to kill any organisation and especially one which aspires to carry the dreams of millions.

One way to reorient the left is through adopting detailed codes which formulate basic rules as to what behaviour so obviously “crosses the line” that it is incompatible with membership of a socialist group. This winter, for example, the International Socialist Organisation (which was for many years until 2003 the SWP’s American affiliate) is preparing for its own annual conference. One of the documents being circulated by its leadership is a Code of Conduct for the ISO’s members.

The Code commits them to conducting debate rigorously, but with civility and respect. Members are made accountable for actions that bring serious harm to other members or to the organization. Discrimination and harassment are prohibited. All sexual encounters must be consensual, whether with another ISO member or not.

Elsewhere, in the main body of the ISO’s rules, the group prohibits members from making false statements to obtain membership or engaging in financial improprieties, or acting as a strike-breaker, a provocateur, or an informer

I like the document and I support the ideas behind it but I won’t pretend that it, alone, could cure the problem. For one thing, the behaviours prohibited by it seem to have been selected quite arbitrary. I accept I wouldn’t want to be in a party with a police informer or an agent provocateur, or indeed a former informer. How about a police officer? (I assume not) Or a prison officer? Or a serving soldier? Someone who owns their own business? What if the business has a left-wing content? In the SWP, we tried to prohibit for a time our members having jobs in the union bureaucracy or even on 100% facility time. Unfortunately our former National Secretary had a number of friends in these positions, so we maintained the rule, but applied it arbitrarily. In some cases, through the party’s ignorance of what its members were up to; we didn’t apply it at all. Should we have kept the comrade who serves in the bureaucracy, as a very senior manager (i.e. with a power to hire and fire), and who has an OBE for his services to trade unionism? Does it make a difference that he is one of the kindest and most genuine people you will ever meet, as well as a committed revolutionary?

It is quite obvious, after the Delta rape scandal, that any left-wing organisation with any survival instinct will respond better than the SWP has done to complaints of rape. But any Code isn’t made useful by its ability to recognise last year’s errors, you want it to guide you through next year’s crises, whatever they may be.

The definitions of discrimination in ISO’s document mirror American law, but US law is relatively underdeveloped compared to various international counterparts. European law (and therefore even UK law) prohibits a much wider set of behaviours directed against wider sets of disadvantaged groups. This isn’t to praise UK law, by the way, which is itself the product of certain kind of social compromises and has all sorts of limitations, but only to say that any list will always be incomplete. The trick is to work out what the principles are behind our prohibition of certain behaviours, and to hope that those principles will guide you right even in unfamiliar situations.

Integrity has a second meaning; consistency. We in the SWP often say that women’s liberation is “integral” to our politics, if this is going to be more than hot air, it would have to mean that every aspect of our socialism was shaped by our commitment to ending women’s oppression: that we could not think about trade unions, universities, anti-fascism or anything else without thinking about women’s oppression.

One story about the old SWP illustrates nicely what integrity can mean. The revolutionary journalist Paul Foot had been educated at Shrewsbury public school, and his friends there, including Richard Ingrams, Willie Rushton and Christopher Booker later worked with him on the magazine Private Eye. Unlike them, Foot was a socialist, joining the SWP’s predecessor, the International Socialists, in 1961 after leaving Oxford and remaining with IS/SWP until his death in 2004. A few years before he died he suffered a heart attack and was recovering in hospital, mute and seriously unwell. Friends from Private Eye visited him, and, as lay in bed, said that they had raised enough money for him to swap his NHS bed for one in a private hospital. Unable to speak, Foot lifted his fingers at them in a V-sign. Ill as he may have been, he was the same Paul Foot he had always been.

How do parties show integrity? Socialist Alternative, the largest IS group in Australia, published five years ago an Anti-Sexism Manifesto, setting out how to enable women to take part in a group as equals with men.

The pamphlet describes, in ways which any socialist should recognise, how men can dominate in social relationships, how women still tend to do the majority of housework and certainly childcare (even in socialist relationships). It notes the persistence of old, stereotypical ideas about how men will be the ones who work and women the ones who do most of the caring. It accepts that there is a limit to how far sexism can be overcome under capitalism, but makes a comparison with workers’ subordination: “Socialists do not passively accept that workers will always submit to their bosses’ authority, or that they will automatically adopt racist or other divisive ideas … We fight these ideas vigorously when we can. And so it is with sexism.”

Much of the pamphlet is about consent, and why socialist men should never chivvy a woman for sex, get her drunk in order to sleep with her, pretend that a “No”was playful rather than serious, etc. “No means no at any time”, its author writes. It talks in practical ways about what is wrong with men controlling women. Socialist Alternative encourage their members to practice safe sex, and to see this as something which is the man’s primary responsibility. Last of all, the authors of the pamphlet insist that no-one should use the group as a pick-up joint.

Some of the ideas in their pamphlet are things which people on the left have done intuitively for years. Even in the SWP, we don’t normally ask men to speak at Marxism on women’s oppression. Generally, we do try to have a number of women either speaking, or at least chairing, our national events. And any comrade who has been in the SWP more than a few years will remember a time when we tried much harder to challenge sexism than we do now. In the past, for example, we did try to provide childcare to enable parents to attend our meetings. The problem is that all these things we do, or did, feel partial. We never explain properly why we do them. They are not followed through in our campaigns or our publications.

A theme of the SWP opposition has been that if we want people to believe that we actually have a theory which makes women’s liberation “essential” to our project, then we need to demonstrate that our internal practice matches up to the way we like to present ourselves to the world. You can’t say one thing and do another …

[the piece continues here, at page 18]