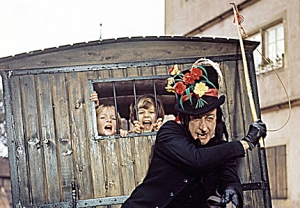 For all the talk of the corporate take-over of the Olympic Games, less has been said about the take-over of the Paralympics. Here, the great scandal is the role given to Atos, whose website describes the company as the “IT sponsor” of the event. Atos is of course one of a cluster of Olympic and Paralympic sponsors which exists in a parasitical relationship to the state; providing private services which once would have been done by government departments, and doing so at exorbitant rates.

More particularly, Atos is the primary recipient of government contracts for “work capability assessments”, i.e. the process under which disabled people are declared fit or unfit to work, with the result (where a finding of capability is made) that their benefits are downgraded to those available to other, non-disabled unemployed people. It is estimated that as many as 1 million disabled people have failed capability assessments over the past 4 years. Many of course have appealed (and appellants’ success rates are unusually high in this area of the law), but this is a jurisdiction which does not receive legal aid, and many others have felt powerless to do anything to resist Atos.

Examples of people to have been diagnosed as well by Atos include people with terminal cancer, people between sections by mental health professionals, etc. Atos has been criticised by CAB, McMillan Cancer and others.

The BMA Local Medical Committee Conference has voted unanimously for an end to work capability assessments and it was announced last year that 12 doctors employed by Atos were under investigation by the General Medical Council over allegations of improper conduct. Seven of the doctors had been under investigation for more than seven months. The complaint linking all of them was that they had assessed people incapable of work, as if they were capable, doing so for Atos.

For disabled activists, Atos’ role in the Paralympics is about as incongruous as putting the Childcatcher from Chitty Chitty Bang Bang in charge of a children’s kindergarten.

Details of the July 28 protest below (click on the image to enlarge): 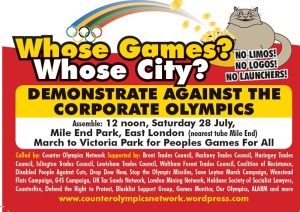