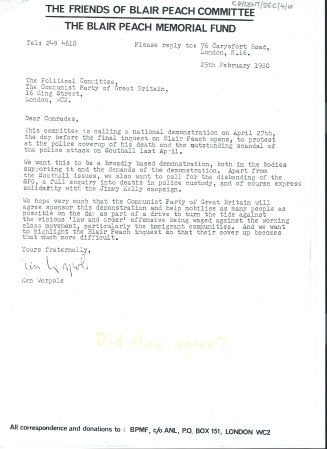 After previous articles looking at the reporting of Blair Peach’s death by the SWP and the IMG, today I thought I’d look at the Communist Party of Great Britain, which, after an initial period of scepticism about the Anti-Nazi League had come fully on board by late 1977, a shift marked publicly by the agreement of Ken Gill the General Secretary of TASS, an old-school loyalist to the Eastern European states, to speak at Peach’s funeral in 1979.

I’ve already given some examples of the coverage of Blair Peach’s killing in the Morning Star, which was exemplary, and indeed continues in a similar vein today.

Here, with thanks to Evan Smith, are two examples of the CP’s involvement, as a party, in the campaign. The first (top) is a letter sent by Ken Worpole, a teacher, a friend of Blair Peach and a member of the Friends of Blair Peach committee, a writer about landscape, and at times a loosely-fellow-travelling supporter of the EuroCommunist wing of the CP, in February 1980, to the party asking it to support the demonstration to coincide with the opening of the final inquest, 4 days after the anniversary of Peach’s death. “We hope very much”, Worpole writes, that “the Communist party will agree [to] sponsor this demonstration and help mobilise as many people as possible on the day as part of a drive to run the tide against the vicious “law and order” offensive being waged against the working class movement, particularly the immigrant communities”.

The second (below) is  a letter from the CP to the Home Office (and the official reply).  CP General Secretary Gordon McLennan was adding his party’s name to the demand for  a public enquiry into Peach’s death and the events at Southall. The Home Office’s reply is a typical piece of officialese, ignoring altogether the demand for an enquiry and merely repeating facts already in the public domain: that the police officers had been investigated by Commander Cass, and that the Director of Public Prosecutions had decided not to prosecute. 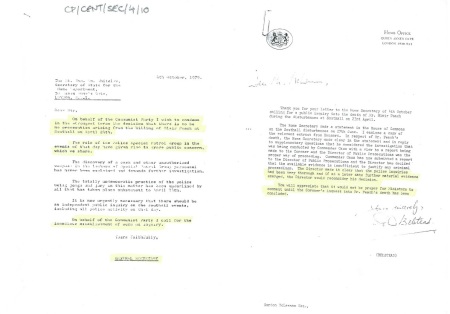 The important interim pieces of information – that Cass had called for prosecutions, but been turned down by the DPP – the civil servants knew perfectly well but refused to admit. As ever you can double click on the images to enlarge them.