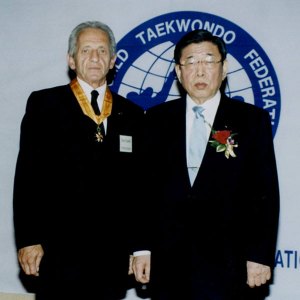 Following my last post, I thought I’d focus in on just one of the highest-profile individuals associated with  the Salt Lake City 2002 Winter Olympics bid. Dr Un Yong Kim (above, right), the then President of the World Taekwondo Federation, and the President of the American Sports University, who probably received as much negative press coverage as any of the several sports administrators caught up in the scandal.

The allegations against Kim were that in return for agreeing to back the Salt Lake bid he demanded a concert booking for his musician daughter Helen Kim; American visas for companies which had recorded his daughter’s music; a visa and a job for his son. The son, in order to avoid investigation, fled the US, and was eventually captured in Bulgaria , where he spent six months on remand (i.e. in prison), fighting extradition proceedings.

In 1999, Kim was investigated by the IOC for his part in the Salt Lake case, and warned, but not removed from the IOC executive.

The third-placed candidate, Dick Pound (the founding chair of the World Anti-Doping Agency), records in his memoir that two years after Kim’s election, Kim still had in hand $1.5 million, which he had raised for the IOC competition, but never spent. “Whatever the playing field we may have been on”, Pound concludes with some bitterness, “It was far from level”. (Dick Pound, Inside the Olympics (Montreal: Wiley, 2006 edn), p. 267).

In 2004, Kim was charged in the South Korean criminal courts with embezzlement, relating to taking several million dollars in funds from the Taekwondo Federation, and sentenced to two years imprisonment. Kim was then re-investigated by the IOC, which recommended his expulsion in 2005. Kim resigned to pre-empt that sanction.

The extraordinary feature of his case was the initial stance of the Olympic ethics committee: not to punish Kim for corruption, but to treat him as too senior to challenge.

The original anti-Olympic text, this book tells the story of the build-up to the 1992 summer Olympics at Barcelona. Some of the account, of course, is now dated. Reading about the gifts given to the International Olympic Committee (IOC) committee members in the bidding rounds of the late 1980s (a gardening book, Swedish handicrafts, various silk scarves), what strikes is the relative modesty of the gift-giving. The successful bid for the 2002 winter Olympics was secured by largesse on a grander scale: $3million (or roughly $30,000 per IOC delegate) in cash, “scholarships” and plastic surgery, and the scale of the graft since then has no doubt become more extreme.

A key figure in the book is Juan Samaranch, then 12 years in to a 21-year stretch as President of the IOC. Illustrated with pictures of its protagonist wearing the blue shirt of a regime loyalist, the book showed that Samaranch had spent the preceding 25 years as a middle-ranking official in Franco’s fascist regime. Jacques Rogge, the present incumbent gets a single mention in the index, as a junior figure in the Samaranch machine, promoted without distinction in 1991. Rogge lacks any of Samaranch’s malign charisma; the worst that can be said about him is that he has tolerated the return to the IOC of the very officials who were slated for taking bribes from the 2002 bid.

One episode which astonished even me was the account of Giovanni Evangelisti’s bronze in the long jump at the 1987 World Championships, achieved by judge Tommaso Aiello placing the measuring prism in the sand at a medal-guaranteeing distance of 8.38 metres before Evangelisti had jumped. This mission appears to have been carried out at the instance of Primo Nebiolo, President of the International Association of Athletics Federations, and one of Samaranch’s closest allies.

It wasn’t always this way. Evangelisti’s predecessor had been Adriaan Paulen, a former Dutch Resistance fighter who dressed frugally, and travelled as cheaply as possible. Repeatedly offered trinkets: shoes, footballs, he insisted on never taking anything. “Once you have been brought”, Paulen said, “you are never free again.”

Particular companies recur through the story, as being especially brazen about using the Olympics to promote their brands: Coke and Adidas in particular. Simson and Jennings record than in 1968, following complaints about the commercial rivalry between Puma and Adidas, and the attempts of shoe manufacturers to keep “amateur” athletes on their payrolls, the IAAF voted that all future athletics competitions athletes would be required to compete in shoes without branding or any marks to identify the manufacturers.

The decision has clearly lapsed, judging by the announcement that British athletes will be equipped in no fewer than 70 items each of Adidas kit. Some of these athletes of course are already sponsored by rival kit manufacturers. These unfortunates will have a dilemma ahead of them: it is a condition of competing for team GB that athletes wear Adidas branded clothing on the track and (if they succeed) on the podium. Should they refuse to wear the clothing of their present sponsors, they could find themselves in breach of contracts running into the tens of thousands of pounds. Should they wear Nike (say) over Adidas, they can expect to be pursed with as much vigour as the drug cheats and banned presumably from future competitions.

A history of corruption; a future in which the global competition of brands displaces that of the athletes: Samaranch would be proud of his creation.