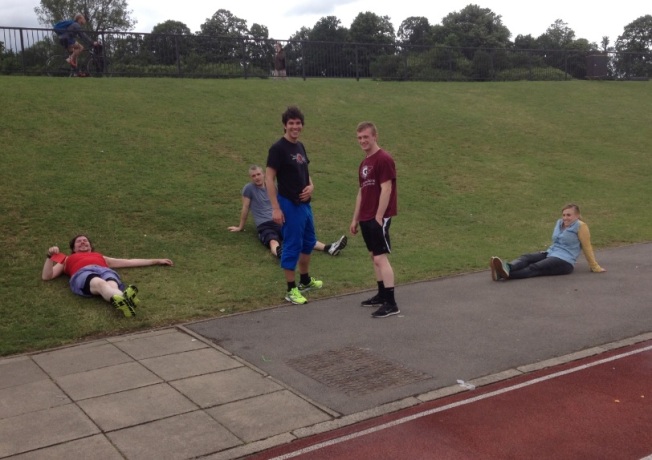 The Indignado Bolshevik mile race, run today, saw a distinguished field of revolutionaries, stoners, students and wastrels, run 4 laps of the Parliament Hill track. We were lucky with the weather: after two hours of solid rain, the sky cleared just fifteen minutes before we set off. We were also fortunate to avoid an accident with the steeplchase barriers which a previous group of runners had left on the track for us. We warmed up by watching these adonises pounding around the track, when one, showing off his hurdling technique, managed to wrap his foot in a hurdle, twisting his body, and falling hard on his chin, side and leg. For a whole minute he did not move. He had to be carried off the field of battle but came out some time later to wish us best with our own amateur event. “I’m often asked what it takes to be one of the fastest athletes in Britain”, he told us, his face red and bleeding, “and you’ve just seen it.”

Unburdened by the same pressure, Soren went immediately into the lead, and with an advantage of 50 metres after the first lap (run in 74 seconds) it was clear that the only thing which could stop him from winning was if he had gone off too fast and failed to pace himself property. Further laps in 81, 86, and 83 seconds saw him home first in 5 minutes 24, a clear 28 second and over 100 metres ahead of everyone else.

The real battle was between second and third: after a lap, I was about 25 metres up on Mark Bergfeld, and he continued to shadow me to the bell, which I reached in 4:26 and him in 4:31. We finished in 5:52 and 6:01 respectively.

The greatest improvement from our previous race a year ago was shown by Robin Burrett, who ran the mile in 6:50, a staggering 19 seconds faster than he had run in the much sunnier Trotskyist miler race of 2013.

Battling back from injury, Ian Stone finished the mile in 8:37.

I don’t know if we’ll run it again in this format; for today we say Goodbye Lenin to Mark,  who is back in England in a month’s time only for his final farewell party.