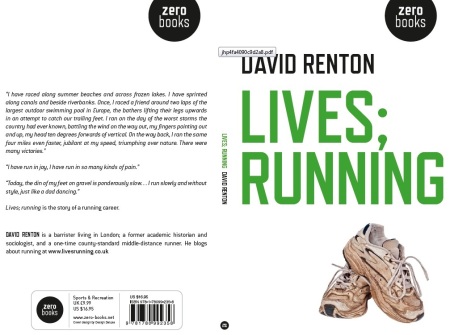 After a year in which sport had been hugely prominent, most obviously through the London Olympics, Lives Running is an unusual book which provides a deeply personal narrative of the author’s experience sof running both competitively and recreationally.

The descriptions of early expectations of – and indeed realised – success in middle distance running at school bring the reader into a private world where the joys of acheivement and pain of injury impact heavily in a context where great emphasis is placed on sporting prowess, through peer and family culture.

The author however interjects interesting facts and analysis of a sport for which he remains clearly passionate, most significantly of the oft-forgotten rivalry in middle-distance running between Steve Ovett and Sebastian Coe that developed in the late 1970s and which reached its peak at the 1980 Moscow Olympics.

Fascinating detail is provided about these two individuals’ backgrounds and experiences and which in particular furthers a degree of insight into Coe’s trajectory from ungracious loser to Ovett in the 800m Olympic final, to Tory MP and then ultimately to crowned glory as the Chair of the London Organising Committee of the Olympics and Paralympic Games (LOCOG) and beyond.

As the currently shallow discussions about the “legacy” of the London Olympics proceed, it is refreshing to read an account of sport by someone who was active in the important critique and attendant activism surrounding the Games.

The contributions of such individuals, as people passionate about sport but also about real accessibility and participation will be essential as the memories of London 2012 fade, the corporate Olympic juggernaut moves on and cuts in public funding for leisure services translate.

In essence however Lives; Running is a memoir of one individual’s relationship to sport and the power of the same to ultimately provide straight forward entertainment, far from the madding crowd or otherwise.

I wanted to remind all readers of this blog that I’ll be speaking this evening from 7pm at Housmans bookshop.

Much of my talk will be about the Olympics, about the ways in which the corporations have used them to take over London, and about the individuals who have profited from them (Coe, Mittal, Dizdarevic…). I’ll also speak about the way the Games have been organised as a sporting spectacle, their jingoism, their sexism and racism.

I’ll also speak about my book Lives; Running, and the alternative model it articulates of a different kind of sporting practice: one based on participation rather than spectating, and one which thrives on racing defeats as well as on victories. I’ll use Coe here, again, as a negative model, whose life story points a way (against Coe’s wishes) towards how to run freely.

The talk will be at:

The Olympics are a windfall for the privileged: construction companies (who have been bloated by building contracts worth £12 billion), the organisers (16 of whom are on salaries of over £150,000 per year) and East End landlords, who have used the Games to evict thousands of tenants. Providing security for the event has resulted in an unprecedented militarisation of London. But has it always been like this?

David Renton, the author of ‘Lives; Running’ (Zero Books, summer 2012), reaches into the history of the Games to tell an alternative story of protest and hope.

David is joined by Gareth Edwards, who gives a socialist take on sports, politics and money on his blog at http://inside-left.blogspot.co.uk/

This event is part of the London’s Burning series at Housmans.

“The runner”, writes David Renton, “succeeds or falls by his or her own effort not through the efforts of others.” Renton is a barrister who runs in his spare time. His book is a record of a lifetime of running that began when he was at school. Interleaved with his account of a racing career which peaked when he was barely 15 are Renton’s reflections on the defining athletic rivalry of his childhood in the late 1970s and early 1980s: that between Steve Ovett and Sebastian Coe.”

This shows the first copies of Lives; Running, hot off the printing press and now available to purchase. The photo was taken on my desk in chambers; you’ll have spotted, I’m sure, the pink tape in the background.

Bookmarks have kindly agreed to sell it at the Marxism festival. For any readers of this blog who would like to find me there I’ll be at Alan Kenny’s Olympics talk on the Friday, and then speaking myself on Saturday morning and then around the rest of Saturday and bits of Sunday. Hope to catch up with some of you there!