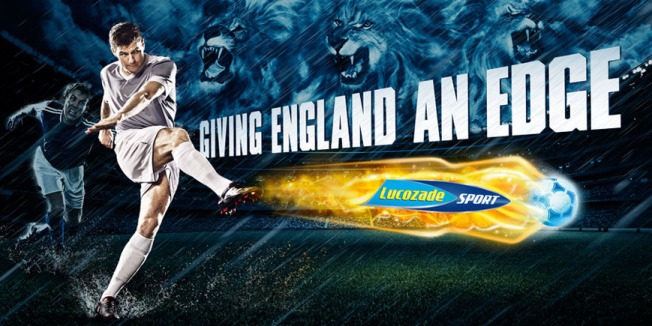 Not all Lucozade campaigns have been equally inspired…

Anyone running the recent inaugural Hackney half-marathon will have seen that in addition to the regular water stops, the event also offered free energy drinks to all runners after eight miles. It was not just an act of generosity on the part of the manufacturers but a commonplace piece of advertising, of a par with Lucozade’s launch of two Brazilian flavours to tie in with the World Cup. And while Lucozade is not one of the official sponsors of the tournament in Brazil, anyone watching could hardly miss the images of footballers drinking vast quantities of other, branded sports drinks left conveniently just beyond the edges of the pitch.

Sports drinks are big business: Lucozade’s sales in the UK are running at around £450 million per year, or around £9 per adult in the country. But if you are a runner; will a sport drink boost your performance?

I was encouraged to try sports drinks by a physiotherapist who I was seeing for chronic stiffness in my calves. “It’s muscle cramps”, he explained to me, “if you are short of sodium in a particular muscle, it stiffens. So it must be that what you need to do is increase your salt intake. That’s what the sports drinks are for.” From the moment that I received this advice, I doubted it was suitable for me: in my early thirties I was diagnosed with high blood pressure and also found to have (modestly) high cholestrol. Most of the men in my family have had heart disease, for anyone with this history, increased salt really isn’t what your body needs.

Running is ideally a low-tech sport; part of its appeal is precisely that it doesn’t require an apparatus of equipment or clothing. You can take part happily without enabling anyone else to make money from you. Every time you come across a “running gadget”, whether it is Nike’s cushioned heels which originally launched the jogging boom, energy gels, foam rollers or whatever, scepticism is right. If we’ve always needed sports drinks, then why did we wait for a Lucozade or a Gatorade to invent them: why wasn’t there an equivalent years ago?

But energy drinks are becoming more pervasive, and it’s hard to resist the micro-advertisement effect of watching other runners gulping down a sports drink immediately on finishing a race.

Sports drinks’ selling point is their capacity to replace lost electrolytes (i.e. salt). “Electrolytes help to replace the sodium lost in sweat”, Lucozade website tells you, “which you are sure to do when exercising moderately. Lucozade Sport helps to replenish these lost stores and help you to retain fluid.”

Of course it is right that people sweat on either moderate or extreme exercise. I run in a black cap and I can see for myself the salt I’ve lost at the end of my daily 45-60 minute runs. It forms a permanent white band around the inside of the cap’s rim.

But, as well as losing salt, when you run your body is also losing water. If a person is losing both salt and water while running, so long as they drink water to compensate, there is no reason for their salt levels to become unbalanced. As it happens, a typical runner has not lower but higher salt concentrations in their body at the end of a long run. If that sounds unlikely, the authors of this website claim that in research studies done on runners at the Comrades ultra-marathon in 2005 and 2006, the sodium levels in runners’ bodies were higher at the end of the event than the start. The sodium in an energy drink would not assist these runners; rather, it would throw their bodies modestly further out of balance.

The Comrades marathon is a 56-mile race through the hillsides of Kwa-Zulu Natal. If the people running that distance have no need for energy drinks then you can pretty sure that they are quite useless for the typical 30-miles-a-week-or-less runner.

The answer to my physio’s suggestion is a simple thought experiment. When a person is short of salt they may indeed suffer cramps, but the cramps they suffer will not be specific but spread throughout the body. Now think about where a runner feels cramps, typically in their lower legs, not throughout their body. This is a sign that the runner is tired in the muscles they have used the most. But if the cramps are just in the calves, it’s not a sign of salt loss.

I am not suggesting that sports drinks are wholly useless. They contain a fair amount of sugar which the body burns during exercise. But for a low cost alternative try adding a table spoon of generic cordial to your water bottle when you run. It will be a tenth of the price, taste nigh on identical, and it will do you as much good.