Yesterday saw the first leg of the Counter Olympics Network alternative torch relay, with three of us (Simon, Charlie and myself) running the torch from Stratford to Wanstead Flats. We had a number of people with us on bikes, including Michael who led us brilliantly through the route, journalists from Games Monitor and elsewhere, and even a police escort of two cyclists who very kindly allowed us to run in the road. (They were not the only official presence, there were a number of Olympic vehicles along the route, we went via the new Police HQ on Wanstead Flats, and when we got to Fred Wigg Tower, two of the soldiers there gave us a wave).

It was one of the most enjoyable protests I’ve ever been on. We carried the Vancouver Poverty Olympics torch as we ran, and as people saw us you could watch them thinking: “is that the Official relay? … what are they carrying? … oh!” and then laugh (for those of you who’ve never seen the torch it’s in the speaker Julian’s right hand above). The torch is a sink plunger decorated with gold ribbon. In the flesh it’s very obviously not the “real” torch. And we were going slowly enough to keep up a  shouted explanation or two “Sport for the millions, not the millionaires … What have the Games done for East London? … Say No to the Coca-Cola Olympics” etc).

I’ve not had as many smiles, waves, laughs, on any demonstration or anything – since perhaps I was a child and (this is true) my uncle used to drive me round the small towns of middle England in the car Chitty Chitty Bang Bang (which he had bought after being a stunt driver on the film).

Onwards then to round 2 of the relay – this Friday, departing from 2pm from the cafe at Clissold Park in Stoke Newington.

UPDATE Rikki at Indymedia has put together a fantastic “photo-story” of the event here. And there’s a write-up on the CON website here.

In case anyone missed my last post, here is a reminder that CON is still looking for runners and cyclists to take part in two short relays over the next week, of about 4 miles each. The main development in the last few days is that we have been able to confirm receptions with two local campaigns:

Saturday 21st July (i.e. tomorrow). Meeting at central Stratford (i.e. outside tube station) at 1.30 for an intended 2pm start. We will pass the Fred Wigg Tower and the missile battery and end at Wanstead Flats, where there will be a welcome for us hosted by the Save Wanstead Flats capaign.

Friday 27th July. Meeting at the cafe at Stoke Newington’s Clissold Park at 1.30 for an intended 2pm start, ending at Leyton Marsh, where there will be a welcome for us hosted by Save Leyton Marsh.

I gather we can also expect a bicycle escort from the Metropolitan police. 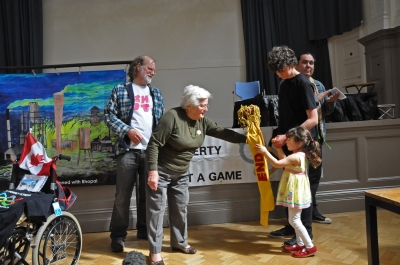 CON is looking for runners and cyclists to take part in two short relays, of about 4 miles each, as follows:

Saturday 21st July. Meeting at central Stratford (i.e. outside tube station) at 1.30 for an intended 2pm start. We will pass the Fred Wigg Tower and the missile battery and end at Wanstead Flats.

Friday 27th July. Meeting at the cafe at Stoke Newington’s Clissold Park at 1.30 for an intended 2pm start, ending at Leyton Marsh.

We will not be running anywhere near the official torch relay.

Historic Olympic Protest Torch Relay in East London
Press Release from Counter Olympics Network – 16th July 2012
The iconic Vancouver Poverty Olympics Torch will make an historic appearance in London. The East London Poverty Torch Relay will herald the ‘Whose Games? Whose City?’ Demonstration against the Corporate Olympics to be held on July 28th. Counter Olympics spokesperson, Julian Cheyne, said:
‘The Poverty Torch Relay highlights long-standing Olympic issues of eviction, land seizure and the exclusion of the poor. London 2012 is no different. The Olympics epitomises corporate power and growing social inequality.’
The Torch was handed over to London at a ceremony at the Olympic Cauldron in Jack Poole Plaza, Vancouver in 2010, visited Glasgow in March 2012 and was received by the Counter Olympics Network at the Bishopsgate Institute in April 2012.
Julian Cheyne added: ‘This is a milestone in Olympic protest – the first time, to our knowledge, that a protest torch has been handed from one host city to another. We hope this will be a feature of protest in future host cities.’
On Saturday 21st July, the Torch will go from OLympic Stratford and end at bulldozed Wanstead Flats, where there will be an open day arranged by the Met to look at the police facility from 11am to 3pm. Our runners will be received by members of the Save Wanstead Flats campaign at the end of the open day event.
On Friday 27th July, the Torch will go from scenic Clissold Park to the unsightly basketball training facility at Leyton Marsh. The Save Leyton Marsh campaign will hold a welcome party for the torch.
The relays will start at 2pm. Allowing roughly an hour to complete the routes means the runners should arrive at both end points at about 3pm.
Notes
1. Compulsory Purchase for London 2012: ‘A prime opportunity for the property industry.’
http://gamesmonitor.org.uk/node/640
‘We don’t think it will be difficult to get partners,’ says LDA head of property and development Gareth Blacker. ‘If we do the site assembly we’re proposing to do, we’re creating a prime opportunity for the property industry.’
2. Wanstead Flats – A Terrible Precedent Is Born
http://www.blowe.org.uk/2011/12/wanstead-flats-terrible-precedent-is.html
The campaign against the use of Wanstead Flats during next year’s Olympics by the police for a Muster Briefing and Deployment Centre has never just been about what happens in 2012. From the beginning, it has always been about the precedent set by choosing to enclose part of Epping Forest, an area supposedly protected by a 135-year-old Act of Parliament.
3. History of Our Campaign: The story of Save Leyton Marsh
http://saveleytonmarsh.wordpress.com/history-of-our-campaign/
The landgrab is not just about abusing a large area of greenbelt land in opposition to the local residents. It’s not just about creating a precedent for this land to effectively become brownfield and so ready for other development. We have uncovered that it’s also a Trojan horse whereby the Lee Valley Regional Park Authority (LVRPA) will be able to more easily implement its pre-existing (but publicly unknown) proposals to knock down the adjacent Ice Centre in Lea Bridge Road and build something double its size.
Principally we have learned that the weight of state oppression is on us. Save Leyton Marsh originally set out to be a local environmental campaign, and the group would have opposed whoever, whichever public body decided to start digging up Leyton Marsh for whatever reason, for whatever period of time. We have learned that because the purpose of this shameful destruction of our green fields is the London 2012 Olympic Games, we are not free to object, protest or campaign as we should be.
4. Planning Displacement: The Real Legacy of Major Sporting Events
http://gamesmonitor.org.uk/node/931
Three Games, three eviction stories. In September 2009 Planning Theory and Practice Magazine published, in its Interface section, three articles on displacement caused by three different mega-events, the 2014 Commonwealth Games in Glasgow, the 2012 Summer Olympics in London and the 2010 Winter Olympics in Vancouver.
5. ‘What Olympic Legacy?’
http://gamesmonitor.org.uk/node/1305
In 2002, long before the credit crunch, Game Plan, a Government report signed by Tony Blair, said ‘We conclude that the quantifiable evidence to support each of the perceived benefits for mega events is weak, The explicit costs of hosting a mega event should be weighed very carefully against the perceived benefits…(which) appear to be more about celebration than economic returns’. The party legacy!
6. MEGA-EVENTS, OLYMPIC GAMES AND HOUSING RIGHTS – Report by Centre for Housing Rights and Evictions (COHRE)
http://www.ruig-gian.org/ressources/Report%20Fair%20Play%20FINAL%20FINAL%20070531.pdf
This report is dedicated to the millions of victims of housing rights abuses in the context of mega-events. It is dedicated to those who have lost their homes and suffered displacement or eviction because of the Olympic Games or other megaevents; those who have been arrested, beaten, traumatised, incarcerated, even killed; those who have been dispossessed and impoverished; and those who have otherwise found themselves unable to ‘share the spirit’ when the Olympics or other events came to town.
7. Rio Evictions: Brazil off-course for World Cup and Olympics – UN housing expert
http://www.ohchr.org/EN/NewsEvents/Pages/DisplayNews.aspx?NewsID=10960&LangID=E
GENEVA (26 April 2011) – As Brazil prepares to host the 2014 World Cup and the 2016 Olympic Games, the Special Rapporteur of the UN Human Rights Council on the right to adequate housing, Raquel Rolnik, said Tuesday she has received many allegations concerning displacement and evictions potentially leading to violations of human rights.
8. Sochi’s Soviet style Olympics
http://gamesmonitor.org.uk/node/1087
The dismal record of mega event evictions, media manipulation, lying and overspends continues. Sochi is striving hard to compete with Delhi and Beijing as the most brutal event in recent years.
9. COHRE paper on ATLANTA’S OLYMPIC LEGACY
http://www.ruig-gian.org/ressources/Atlanta_background_paper.pdf
The goal of this chapter is to address the housing displacement and criminalization of Atlanta’s poor and homeless people – both motivated and generated by the Olympic Games.