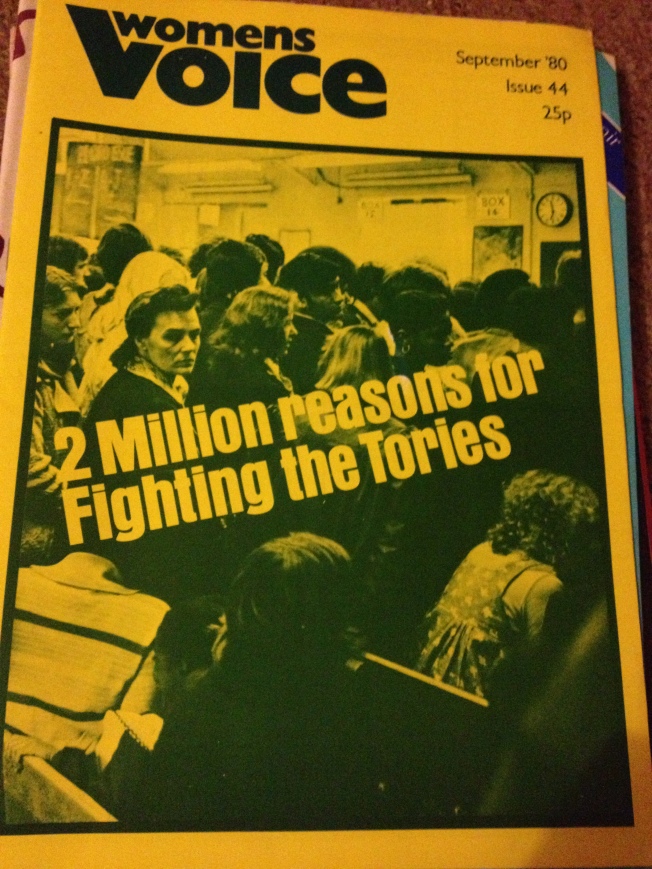 Battered women have become more of a public issue in the last ten years.  They have always existed, but before that they were very much behind closed doors.

But the real difference between ten years ago and now is the existence of refuges and the work of women’s Aid in campaigning for the rights of battered women.

Refuges have become a sanctuary for many women.  The National Women’s Aid federation report describes them as a breathing space.  Often they are the only place a woman can go to except the violence and misery of her home.

‘Reports from groups generally indicate that though new refuges are opening, the numbers of battered women seeking help are constantly increasing.  In 1979 the North West region alone provided accommodation for over a thousand battered women and their families.  In Yorkshire and Humberside two new refuges have recently opened, yet there are only 59 places in the area which is no greater number than two years ago.  As unemployment rises and social pressures increase, especially in small steel towns like Corby and Scunthorpe, more women are seeking refuge’ – from the annual report of the National Women’s’ Aid Federation 1979-80.

Overcrowding, bad conditions, inadequate facilities, are suffered by every refuge.  Four-fifths of the houses used as refuges are rented from Local Authorities.  Many of these are sub-standard.  Women and their children have to share beds and families share rooms.

In 1979 it was taking on average six months to obtain permanent accommodation from Local Authorities.  As one woman said: ‘after six months you get so fed up with refuge life you think you’ll go back to your husband because you can’t stand it any longer.’

As it becomes clear that what we need are more refuges, not less, the opposite is the reality.  This year alone six refuges have been forced to close and five more are under the threat of closure.

‘Houses used as refuges are often unsuitable – many are old (half were built before 1919) and are in poor condition with leaking roofs, faulty wiring and dampness.  A quarter of the houses opened as refuges have since been closed down for health reasons or for demolition’ – from the annual report of the National Women’s Aid Federation 1979-80.

In Hillingdon, Middlesex, the Local Authority changed from Labour to Tory and the refuge was taken over on ‘health grounds’.  The council completely closed the refuge in February this year giving the women who lived there only a few weeks’ notice.  Newham, in East London, was closed two months ago by the fire department.  Due to lack of money to maintain refuges and the difficulty in keeping to the environmental health standards, this puts every refuge permanently under threat of closure.

The cuts are biting deep – one-third of all refuges have no paid workers at all, and those who do are having their funds cut.

In April, Manchester Local Authority cut the Manchester Women’s Aid refuge’s grant.  They fought it and won.  Now Manchester council have announced a 15% cut in social services and voluntary organisations.

Women’s Aid fear they will suffer because of these cuts.  Two refuges in East Anglia have been forced to close because of lack of funding, and Basildon and Chelmsford are seriously considering following suit.

Edinburgh and Lothian Region refuge have in one year been reduced from 15 workers to five and are having serious financial problems.  The list is endless, and so are the effects of the cuts.

Only 16% of the women who lived in refuges in 1979 obtained Local Authority rehousing.  Local Authorities are taking longer to rehouse women which means they have to stay in refuges longer, the result being that women are having to be turned away.

‘The recent restrictions on Local Authority spending and threats to Urban Aid funding serve only to increase our fears that women and children will be forced to remain in violent homes’ – from a letter to Margaret Thatcher form Women’s Aid, July 1980.

Refuges are closing down the same time as hospitals, schools, nurseries…The Tories see women’s problems as ‘private’ and not social.  The Tory image of ‘perfect motherhood’ forces women to take the responsibility not only of their children, sick, elderly, but also for their personal relationships.

Fighting for refuges fits into the fight for control over our own lives, and the fight against these vicious Tory cuts.