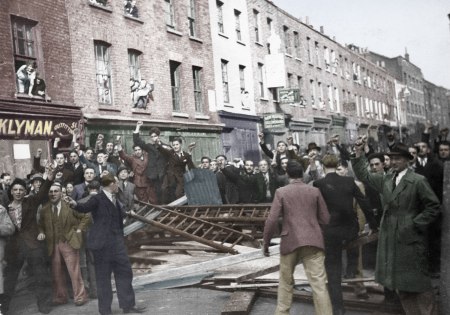 The Battle of Cable Street has gone down in popular memory as the decisive moment when British fascism was confronted on the streets; a victory for anti-fascists which proved once and for all that we were the majority and would not tolerate fascism here.

Certainly, the supporters of the British Union of Fascists were heavily outnumbered, with fewer than 2,000 of their supporters being faced down by over 100,000 anti-fascists.

It is also the case that in the aftermath of the protest, the left presented the events of 4 October as an enduring victory. The Daily Worker produced a special booklet, ‘They Did Not Pass’. Writer Frank Griffin published a novel, October Day. A decade later, with young Jewish activists determined to confront Mosley’s postwar Union Movement in opposition to leaders of the Communist Party (CP) who saw such activism as ultra-left, the CP commissioned Mile End MP Phil Piratin to write a history of the events. His book, Our Flag Stays Red, both commemorated and tamed Cable Street. He presented the victory as the consequence of the Communist Party imposing “strict discipline” on the turbulent class fighters of the East End. The Red Flag of his title, Piratin explained in an epilogue, was held by the Communists, and carried in Parliament in their work (alongside the Attlee government) to extend the welfare state.

Given the scale of what was at stake, the historical record has left surprisingly limited evidence of who exactly was at Cable Street and what motivated them.

Richard Bellamy, Nellie Driver and other supporters of the BUF, acknowledged Cable Street as a set-back while praising the very few fascists who were able to engage in hand-to-hand combat with anti-fascists. (You can see some of those clashes at 1 minute 35 in: here). The East End remained sympathetically to Mosley, they insisted.  Above all, the most popular approach taken by BUF speakers after 1936 was to blame the Cable Street “mob” on a bankers’ conspiracy, with one fascist John Beckett maintaining that “Jewish Finance” had paid for the Communist crowd. These and similar accounts maintain a contempt for the left that goes back to interwar fascism – and a fundamental inability to see the Jewish population of the East End as fully human.

Although the Communist Party called on all its London branches to take part in the Cable Street protests, and although film of the day shows several demonstrators giving a Communist clenched fist salute, the CP was a minority. Even if the party had been able to mobilise its entire national membership, they would not have been more than at most one in twenty of those taking part.

Who, then, was there? One way to see Cable Street is at the forerunner of a kind of community mobilisation which was seen repeatedly in the 1970s. IE a generation of first and second-generation migrants identified with the political left, drawing on a combination of left-wing traditions predating exile, plus their own situation as both workers and victims of racism.

There are a huge number of memoirs (plus novels, plays…) from the East End which confirm this picture. The East End had been a centre of organising by anarchists going back to the unemployed protests of the 1880s, by socialists from the 1889 dock strike to the Poplarism of the 1920s, and by Communists, starting with Sylvia Pankhurst’s campaign among East End women and going on from there to the generation of syndicalists who followed her into the CP. In all these different periods of left-wing organising, Jewish socialists had been prominent.

They were, in this way, the forerunners of the British black community which Sivanandan saw emerging among British Sikhs at Southall in 1979.

It is worth saying that this *isn’t* necessarily how participants saw themselves. According to Morris Beckman of the 43 Group, Cable Street was a class, not a community mobilisation: “South Wales miners, the slate workers, they sent contingents, Sheffield steel workers, Tyneside shipbuilders, and from London docks of course, a lot of seamen jumped form the ships and joined the anti-fascists. Also the nursed and doctors of London hospital, the Whitechapel hospital, turned out…”

On this account, Cable Street was the return of a debt of Jewish-gentile solidarity, which could be traced back to the effects of the London Dock Strike in 1889, in sparking a near insurrectionary general strike in the local area with dozens of workplaces (many of them Jewish) turning out in support. Because the garment workers had supported the dockers in 1889, so the dockers turned out, fifty years later.

There must be some truth to that explanation: the sheer size of the crowds points against them being a purely Jewish mobilisation. The standard estimate of the total Jewish population of Britain in the 1930s is 300,000 people: with perhaps half living outside London, and half of the remainder being too young or too old to have been at Cable Street. Just from numbers alone it seems unlikely that more than half of the people there were – or could have been – Jewish.

Yet, of the groups named by Beckman, there are precious few sources to corroborate that there were Welsh miners present on 4 October or that shipbuilders came in a delegation from the North East. The one group we know for sure were there are the dockers, but even then the sources are thin: Jack Dash says in his autobiography that he was there, but gets the date wrong. Could you imagine one of the many young Jews who were at Cable Street and later recorded their memories of the day – a Harold Rosen, perhaps, making the same mistake?

Back in 2016, the Irish Times ran an interview with Cable Street veteran, Communist councillor and lifelong socialist Max Levitas describing how he had stood at Cable Street alongside his father and other members of their family. Levitas’s parents had met in Dublin having escaped pogroms in Latvia and Lithuania in 1913. They then participated in strikes in Dublin, where Levitas was born. He described the participation of dockers at Cable Street. No-one could criticise a mainstream paper for taking such care with working class history.

But in speaking of the dockers, Levitas was talking about people who could draw on different experiences to his own: the war for independence, the part played by the Black and Tans, the history of anti-Catholic sectarianism in Liverpool and Birmingham and London. These experiences could give rise to a social democratic consciousness (as in post-1918 Liverpool, where the Labour Party which printed its leaflets not in red but in purple) but its heroes were different from those of the Jewish East End tradition, seeped as it was in Bundism, anarchism and Bolshevism. When Levitas told his interviewer, “We knew the Irish would stand with us,” the “we” is the Jews of Cable Street. Born as he had been in Dublin, for Levitas, the Irish dockers remained a “them”.

There is a gap in our knowledge of the events. Henry Srebrnick’s London Jews And British Communism provides a collective political history of the Jewish East End in the 1930s and 1940s, Thomas Linehan’s East End for Mosley does something similar for the BUF, but no historian – as far as I know – has ever written the equivalent community study of the politicised, Catholic, dockers of the East End and their families.

Think of the Jewish East End which produced Arnold Wesker’s Chicken Soup with Barley – and ask yourself what the Catholic equivalent of that play would be. I wonder if we will ever fully understand the protest, until we have that play (or its equivalent).

If it right that Cable Street was first of all a community mobilisation of young and left-wing Jews, and only then drew on support from other workers on a class basis, that understanding might provide a context to one feature of contemporary fascism and anti-fascism: for the last 18 months, the far right has had considerable success in mobilising events in the “deserted zone” of Whitehall at weekends. The best anti-fascist mobilisations in history – Cable Street, Lewisham, Walthamstow – have come about where the left was able to mobilise beyond its usual numbers and bring in wider numbers of people, through a cultural or a community mobilisation. Whether by accident or design, the far right has not been giving us that opportunity.

Whether through a new cultural campaign of our own, or by some other means, anti-fascists need – urgently – to find a way of mobilising which makes up for that gap.