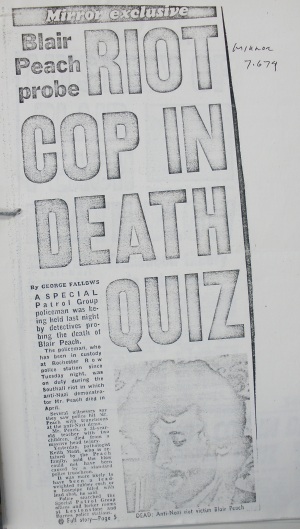 Again, Blair Peach. Today’s article is from the Mirror, on 7 June 1979. While the Anti-Nazi League was announcing details of Peach’s funeral, and the Morning Star was warning people that Peach’s killer was still at large, the police had begun to interview the 6 officers who had been on board carrier 1/1.

Behind the scenes, according to Cass, the six police occupants of carrier U11 were interviewed: “to the extreme”. One “Officer E” said that he was refused food. Another, “Officer F”, complained of being held in custody for three days while he was interrogated.